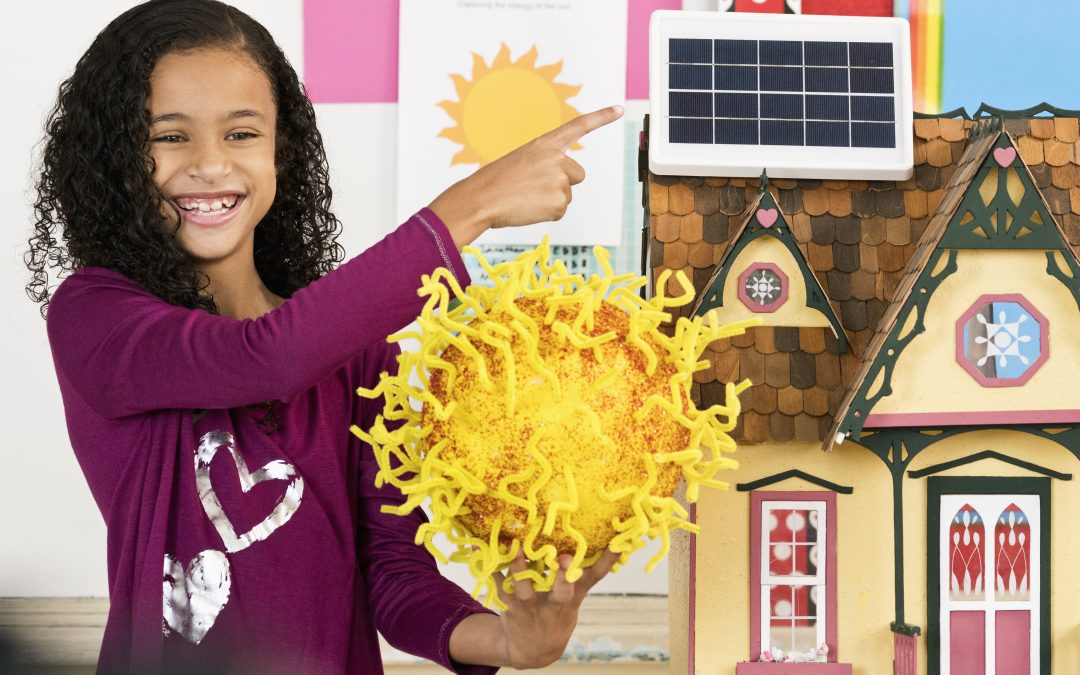 In an era where local governments and municipal leaders are embracing the need to address climate change, the movement for 100% clean energy cities, businesses, and school districts is gaining momentum. In the last several years, nearly 100 cities (and counting) have committed to 100% clean energy, as have major companies like Apple and Google. We believe that school districts are an important frontier for those working to transform our society to 100% clean energy because they are major municipal energy consumers, and because America’s youth will benefit from learning about the viability of this essential climate solution.

K-12 schools produce a large amount of carbon pollution from fossil fuels – the carbon emission equivalent of 18 coal-fired power plants.[1] Yet, schools are also well positioned to be inspiring leaders in our clean energy transition. American K-12 schools switching to 100% clean energy would be like taking one in seven passenger cars off the road—they can stimulate much broader mobilization in communities across the country.

We know that school districts powered by clean energy bring myriad benefits for students and the wider community. These include:

While American school districts still have a long way to go in realizing 100% clean energy, schools at the leading edge of the movement provide important insight regarding available pathways. Here, we highlight the efforts of two school districts in different parts of the country—a small suburban district and a large urban one—working to achieve 100% clean energy: Red Wing Public Schools in Minnesota and San Francisco Unified School District (SFUSD) in California.

It’s important to emphasize at the outset that the expression “it takes a village” is true when it comes to moving school districts to 100% clean energy. To achieve this goal, there is usually a combined effort on behalf of school officials, parents, teachers, and students who are motivated to move in this direction.

Sparked in part by 2013 solar jobs legislation, Minnesota has become a shining light for school districts across the country. It’s estimated that about two dozen school districts across the state,[6] such as Annandale, Chisago, St. Cloud, and Columbia Heights, are powered by 100% solar energy, with a majority of these being accomplished through community solar arrangements. Red Wing Public Schools achieved 100% clean solar energy for its seven schools through their Red Wing Community Solar Garden, commissioned in 2016. The district installed a six-megawatt solar array on a parcel of land they owned adjacent to a school. Through 25 years of operation, Red Wing Public Schools—which serves about 2,800 students—is set to save approximately $6 million in energy costs and generate an additional $1 million in lease revenue from other customers who receive power from the project.

According to Kevin Johnson, Director of Buildings and Grounds at Red Wing Public Schools:

“I have been working for years to get solar into our schools. With school budgets as tight as they are, going green was a very hard sell when the dollars would have to be taken from the classroom. [Our solar garden] was a wonderful project, one where I was able to tell our school board that we could make $7.7 million over the next 25 years and spend no district dollars! ($6.6 million solar garden subscription and $1.1 million land lease). What a wonderful way to help our district and the environment! Win-win for everyone!”

Red Wing was not required to capitalize the project upfront nor maintain the project over its lifetime. The district contracted with an installer, IPS Solar, in an arrangement similar to a power purchasing agreement, whereby IPS Solar shoulders the costs for development and provides discounted electricity rates to the school district. IPS Solar carried out this project as part of a wider Solar4Schools program that serves many districts in the region.

IPS Solar developed and implemented STEM curricula tied to the solar project, and community ties were improved since excess power is supplied to residents and the City of Red Wing. One unusual benefit of this particular project comes from the decision to plant pollinator-friendly species between the rows of solar panels, allowing the district to do its part to address the growing pollinator crisis.

SFUSD demonstrates how an ambitious, holistic plan to eliminate a large school district’s climate impacts can be systematically implemented while bringing a range of added benefits. SFUSD has long counted hydropower as one of its energy sources; however, the district is now working to produce all its power on-site, in addition to tackling a variety of other sustainability initiatives.

SFUSD has been working to increase its sustainability for over a decade. In 2017, the district passed a Resolution in Support of Carbon Neutral Schools, formalizing their ambitious goal of becoming carbon-neutral districtwide by 2040. Through its Carbon Reduction Plan, SFUSD – which serves 55,600 students in 136 schools – is on track to phase out fossil fuel use by 2040, generate all its power on-site by 2050, eliminate all gas usage by 2040, and undertake a range of other measures, such as dramatically reducing vehicle fleet emissions.

“It’s not enough to just talk about the devastating effect of climate change. Leaders in all branches of government need to take action. Currently, 70% of the district’s greenhouse gas emissions come from its buildings and 30% from its vehicles, including buses. We’re setting targets that will dramatically reduce our carbon footprint by 2040. We have a responsibility to our students to lead by example. Hopefully this will inspire other cities and school districts to do the same.”

SFUSD is on track to demonstrate that it’s possible for all districts to achieve carbon neutrality at little-to-no additional cost. In the 10 years since it launched its early efforts to reduce energy use intensity, SFUSD has saved over $16 million in energy costs.[7] As the district moves to zero-net energy, even deeper savings will be had. Because of the multiple benefits of 100% clean energy school districts, from costs savings to improved indoor air quality to doing their part to address climate change, SFUSD’s Sustainability Director, Nik Kaestner, asserts that “Schools are a great place to start the clean energy revolution.”

Katy Mamen, MS, is a systems change consultant who has been working with Climate Parents’ 100% Clean Energy School Districts campaign. She supports organizations and groups around the country in building effective strategies and collaborations to bring about lasting social change. Katy is also a Fellow of the Academy for Systems Change.

Lisa Hoyos is the Director of Sierra Club’s Climate Parents program. She has spent more than two decades working on labor and environmental advocacy. She also worked as a legislative analyst on the California Senate Natural Resources Committee. She is a member of the San Francisco Commission on the Environment and serves on several nonprofit boards including the Alliance for Climate Education and the California League of Conservation Voters.

[3] See for example, Mendell, M.J. & Heath, G. (2004). A Summary of Scientific Findings on Adverse Effects of Indoor Environments on Students’ Health, Academic Performance, and Attendance. Prepared for U.S. Department of Education Office of the Under Secretary. http://www.ncef.org/content/summary-scientific-findings-adverse-effects-indoor-environments-students-health-academic.

[4] See for example, Heshong Mahone Group. (1999, August 20). Daylighting in Schools: An Investigation into the Relationship Between Daylighting and Human Performance. http://h-m-g.com/downloads/Daylighting/schoolc.pdf.