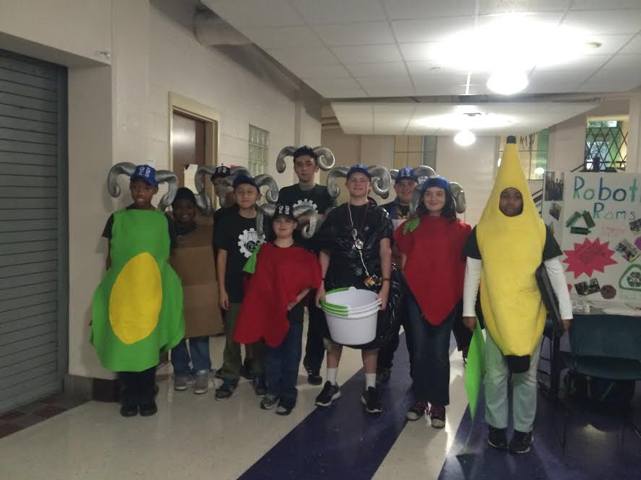 Who would have thought that LEGOs and composting could have something in common?  At Good Shepherd Episcopal School in Richmond, VA, students on the LEGO Robotics team recognized a need for a composting program in their school’s cafeteria.  Through research and outreach to the school community, the students have seen their vision come to fruition and are inspired by the results.

From Recycling to Composting

The Good Shepherd Episcopal School  is not new to environmental initiatives.  The school’s former physical education teacher was instrumental in creating an organized recycling program for paper, cardboard, and aluminum, and students and staff have kept the program going since his retirement.  Every classroom has a recycling bin and students are in charge of collection.  The school repurposes items whenever possible: a misprint bin placed by the teacher copier encourages staff to use the scraps for taking notes and the school’s art teacher incorporates recyclables into art projects.

The idea to undertake composting in the cafeteria was sparked by a presentation by Waste Management Incorporated to the school’s LEGO Robotics Team, the Robotic Rams.  After conducting some follow up research, the students were concerned to learn how much food waste was ending up in landfills.  The students were aware of the large amount of food waste their school’s cafeteria produced each day and wanted to make a difference.  Fortunately, the students did not have to look far.  Their Robotics Team co-lead, Sue Cline, is the school’s chef and has been composting food scraps in the kitchen for some time.  Together with Laura Dysart, fellow Robotics Team co-lead and the school librarian, Ms. Cline and the LEGO team students were able to secure the support of the school’s administration to move forward with a composting program. 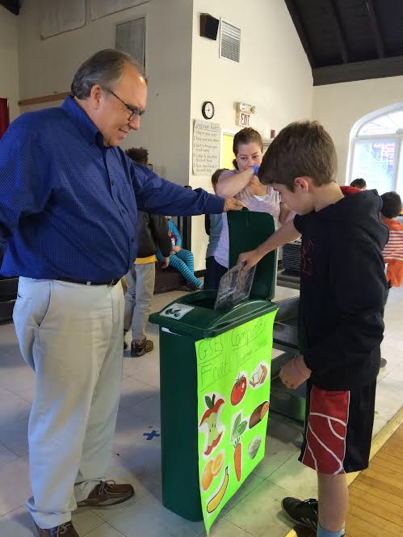 Before the LEGO team students could launch their new initiative, they had to educate their fellow students and school staff on the importance of composting.  The students developed an educational, interactive skit that talked about food waste and recyclables ending up in landfills and introduced the roll out of the school’s composting initiative.  They performed the skit for the Good Shepherd Episcopal School community and at the FIRST® LEGO League Tournament in Richmond, VA, citing statistics throughout their presentation to bring the problem of food waste to life.

To get their composting program started, the students set up a compost container in the lunchroom and created signs with pictures of compostable items to accompany the bin.  Each day, the students are responsible for emptying the daily compost collection from the lunchroom into the outdoor compost bin.  The compost produced from the food scraps is used in the school garden which grows vegetables for the kitchen to use in the students’ lunches.

To help their fellow students understand what can be composted and recycled, the LEGO team developed a simple ball toss game where balls with pictures of compostable or recyclable items are tossed by students into either a “recycle bin” or a “compost bin.”  In addition, the LEGO team students are developing a video game that will help children learn about the importance of recycling and composting while challenging them to sort materials into the appropriate bins.

Although Good Shepherd Episcopal School’s composting program is very new, the entire school community is excited and supportive of the endeavor.  Students are more aware of the problems created by food waste in landfills and are becoming better stewards of the planet.  As one 1st grade student related: “I love the program because when you throw banana peels away, it makes soil!”  Most importantly, the school community is backing up their enthusiasm with action: on the first day of the program, lunchroom trash was reduced by 50%!  The LEGO team students expect this number to go up as the school community continues to be educated on the role they play in composting and recycling.

Good Shepherd Episcopal School is already thinking about the future of their composting program.  The school is holding a series of bake sales in December to raise matching funds from supporter Waste Management Incorporated to purchase a worm composter.  This new addition will not only speed up the composting process, but will be a valuable learning tool for the school’s students.

Laura Dysart is the School Librarian at Good Shepherd Episcopal School in Richmond, VA and has served as the school’s LEGO Robotics Coach for the last seven years.  She works with Sue Cline, Executive Chef and Director of Technology at Good Shepherd Episcopal School, on the composting program. Both Laura and Sue have a strong interest in encouraging their students to pursue a zero waste goal for their school community.