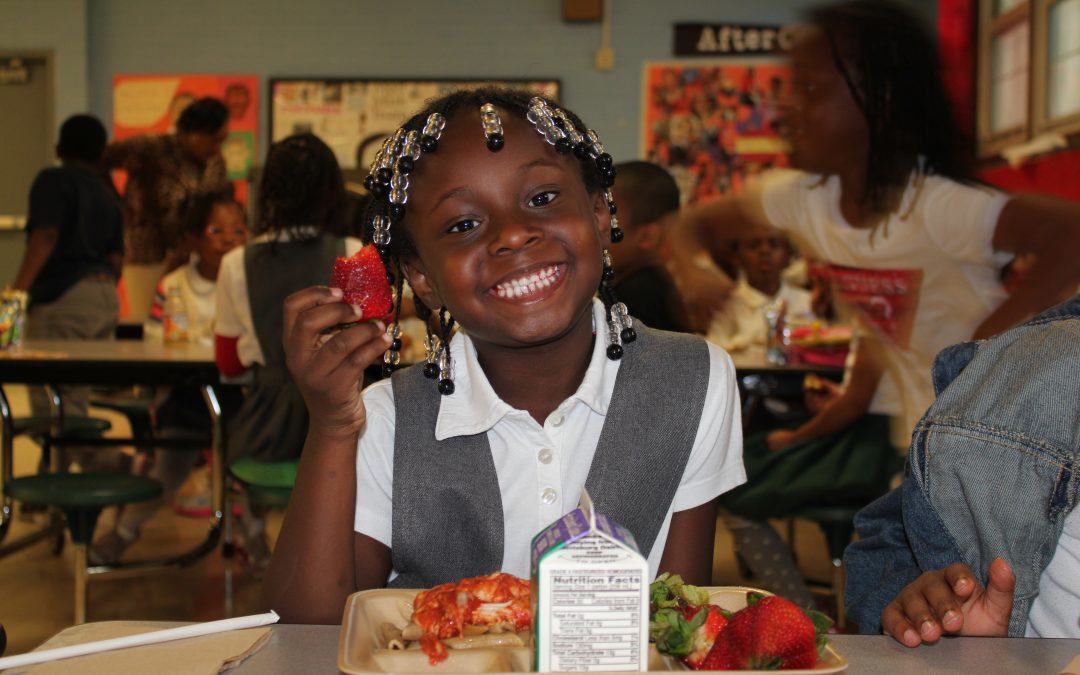 In 2007, Washington, D.C. Mayor Adrian Fenty set out to overhaul many of D.C. Public Schools’ (DCPS) processes, from curriculum to payroll. One of the areas in desperate need of improvement was food. Nutrition standards were very low. Meals were individually packaged and served in Styrofoam containers. “We used cheap ingredients with low nutritional value,” stated Rob Jaber, Director of the DCPS Food and Nutrition Services Division (FNS).

The goal was simple in theory but incredibly complex in execution: to change the food served and the manner in which it was served. Spoiler alert: mission accomplished! The biggest challenge at every step was buy-in, examples of which are highlighted below.

One challenge that DCPS encountered early on was obtaining financial support to invest in higher quality ingredients, better nutrition, and better packaging. Two key pieces of District legislation passed in 2010 helped to solidify that commitment: the Healthy Schools Act and the Healthy, Hunger-Free Kids Act. D.C. legislation predated 2014 improvements to federal nutrition standards, which meant that breaking away from the status quo would come at a higher price. Advocates leaned on those laws as justification to increase spending to adopt positive changes to food quality and ingredients.

The next (and larger) challenge was to get student buy-in for healthy, sustainable, and tasty food. Flavor profiles changed dramatically. Kids weren’t happy about losing chocolate milk, French fries, and fried chicken. Kids resisted, and so did many parents. Food waste was a major problem through the early transition phases, compounded by quality control at each school as the district shifted to a model of scratch cooking in place of warming kitchens and pre-packaged food.

To obtain buy-in, the FNS team launched an engagement campaign with students, parents, and community groups. They started a school ambassador program for grades three and up which allowed students in each school to liaise with FNS to gain perspective, exchange knowledge, and ultimately improve the nutrition program and increase student meal satisfaction. Each school was asked to suggest at least two student ambassadors; some had up to twenty. “Students like to have control over their choices,” said Director Jaber. “They were mature and took their responsibilities seriously. They were treated like adults and they responded in kind.”

The current FNS program model has been in place since 2010. “Students have grown up with it and are used to it. Quality and delivery have gotten better,” said Director Jaber. Changes to federal regulations in 2014 shifted manufacturers’ willingness to accommodate the program’s demand for high quality at a reasonable price. The FNS team continues to innovate and infuse a sense of fun into the serious business of feeding students. The team has a robust social media presence (Twitter and Instagram: @DCPSEats) that they use to communicate menus, initiatives, volunteer opportunities, and student joy. Social media opens a window for others to see the great work happening every day for students.

The FNS program has been impacted by external challenges too. A whistleblower lawsuit led to the district receiving a settlement from its former food service provider. DCPS’ current contract was crafted to ensure that contractors are always liable for maintaining and increasing quality, sustainability, and palatability. The vendors are genuinely interested in doing a good job and changing the conversation around food in D.C. schools. There is intrinsic motivation for success.

Budgets must be constantly managed. Despite additional per-student funding, the FNS team and its partner providers are always finding ways to be more efficient with resources. Washington, D.C. moved away from a model of tracking free meal eligibility for individual students. If a majority of the student population meets the threshold, the entire school is opted into the free meals program.

Conversations about student food preferences and food waste can distract from one of the primary wrap-around services that a school district provides: feeding students who are food insecure at home. Skipping a meal is a luxury that not every student can afford. Food insecurity becomes even more critical when school is not in session. DCPS participates in the U.S. Department of Agriculture’s Summer Food Service Program through which any child 18 or younger can get nutritious meals and snacks throughout the summer months when school is not in session.

One way to gauge the effectiveness of a team is by its ability to perform its primary mission in emergencies. If a school kitchen goes offline in the morning, the FNS team will get hot meals to the school in time for lunch. But where the FNS team really shines is during snowstorms. If an approaching storm will likely lead to school closures, the team will send non-perishable items home with students. During one particularly bad storm, the team opened ten schools in critical areas across the city to feed every person who walked through the doors, regardless of age. National Guard vehicles picked up kitchen staff at their homes and delivered them to schools so they could prepare and serve meals for their communities. The workers were thrilled to contribute above and beyond their regular roles and serve the people of their city. There was a festive atmosphere to the events. In fact, they were so successful that the team is now prepared to replicate them in the future as necessary.

Another way to gauge the effectiveness of a team is through its ability to be proactive and effect positive change outside of its daily operations. Free and reduced-cost farmers markets are set up in schools so families can shop together after school. The FNS team works with partners to bring nutrition education into classrooms, not just the cafeteria. Classroom kitchen labs operate in several elementary schools and are run by FoodPrints, the food education arm of nonprofit FreshFarm. Students grow vegetables, prepare veggie-centric recipes like ratatouille, and share meals together as part of their standard curriculum. At schools with gardens, kitchen staff collaborate with garden partners so that students see the same veggies in the garden as they see on their plates in the cafeteria.

The goals set in 2007 were to change the food served and the manner in which it was served. The results have been undeniably successful. But more importantly, the expectation has been set to continue improving on nutrition and providing higher quality food through responsiveness, innovation, and deep commitment to the mission. Food can be healthy and fun, and the smiles on the faces of students, staff, and parents are one of the best metrics to show for it.

Sally Parker is the Energy and Sustainability Liaison for D.C. Public Schools. She builds collaborative opportunities between stakeholders with a vested interest in sustainable schools. Areas of focus include all things ‘green,’ including energy, gardens, construction, environmental literacy, and green careers.