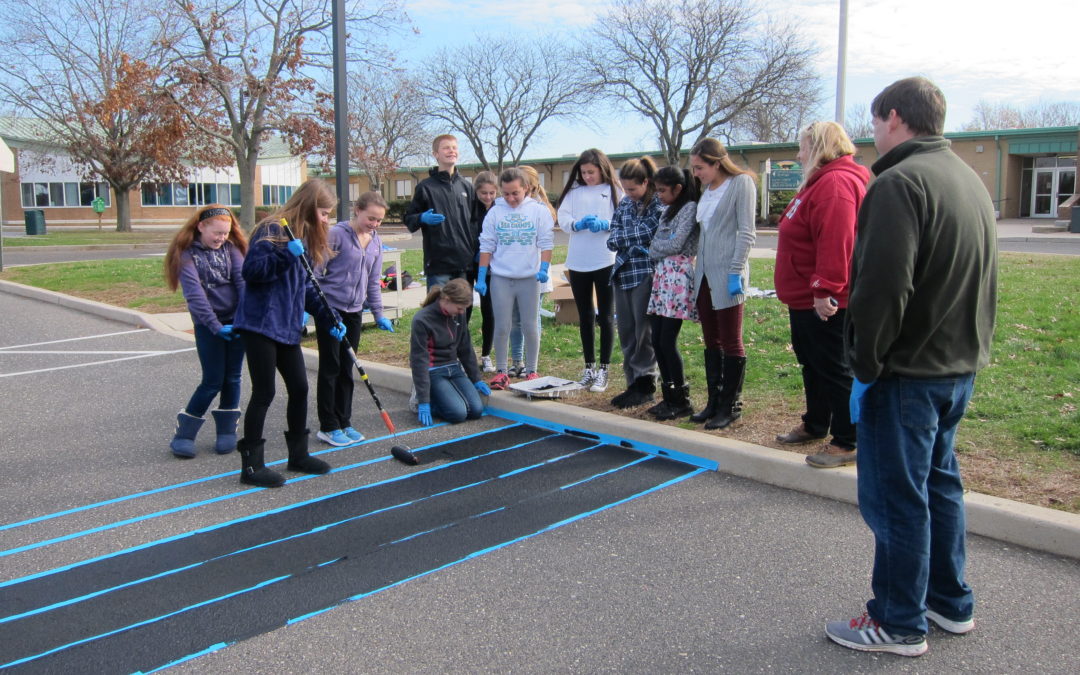 “I owe you an apology.” This comment was uttered to me by a skeptical school bus driver some nineteen years ago. On November 17, 1997, Medford Township Public Schools, in partnership with the New Jersey Board of Public Utilities (NJBPU) and the U.S. Department of Energy, launched the state’s first alternative fuels program using biodiesel blended fuel in a school bus fleet. Biodiesel (B100) is an advanced alternative fuel for use in diesel powered trucks and buses. It can be produced from a number of feed stocks but the fuel is primarily produced from the oil of soybeans grown by American farmers. For the past nineteen years, Biodiesel (a blend of 20% Biodiesel and 80% Ultra-Low Sulphur diesel fuel) has been the exclusive fuel used in Medford Township Public School’s bus fleet.

As you might imagine, this new and innovative program was met by a fair amount of resistance on the part of our school bus operators. I heard a number of concerns such as: “How will this new fuel work in our buses?” “Will our engines shut-down?” “Can the buses really run on soybean oil?” “How will my bus perform in the winter?” The genesis of these concerns was not based on factual information as to the performance of Biodiesel, but simply a visceral response to an unknown. As you will see, these concerns quickly evaporated.

A child’s developing lungs, as well as higher respiratory rates and deeper breathing, make children more susceptible to poor air quality. Since the majority of Medford Township’s students are transported to school in a school bus, it is critical we reduce their exposure to harmful emissions, both mobile and stationary. Many studies have shown that the air quality within a diesel powered school bus is significantly more hazardous than the surrounding outside air. It was a requirement of our federally funded program to perform pre- and post-emission tests on our buses using an U.S. Environmental Protection Agency (EPA) approved laboratory. The results of those tests revealed that the Biodiesel blend significantly reduced targeted hydrocarbon emissions by an average of 35%. There was a slight elevation of carbon dioxide emissions; however, the overall carbon impact of Biodiesel production, as compared to its petroleum counterpart, based on energy ratios, is significantly lower. In addition to emissions tests conducted by the EPA certified lab, the New Jersey Department of Environmental Protection (NJDEP) conducted opacity tests on all of our buses. The results of their tests revealed that a significant reduction in particulate matter was achieved by all the Biodiesel fueled buses, including those buses built in the early 1990s, in most cases by 50%. This alone is a tremendous health benefit to not only our students, but to our drivers and the community at large. Moreover, recent emission studies revealed that the use of Biodiesel (B20) in a modern diesel engine resulted in exhaust emission levels that equaled the levels emitted by an engine powered by compressed natural gas.

Economics, Energy, Education, and the Environment

Parents trust us with their two most precious possessions, their children and their money. Medford Township Public Schools’ prime directive is to fiercely protect both. We are also expected to deliver the best education possible. As a district we learned much from our Biodiesel program. One vital aspect was redefining the meaning of “value.” Value can be described in many ways. For some, efforts must return an economic value. For others, value is defined by engaging in activities that reduce negative effects on the environment. For Medford Township Public Schools, value means providing a rich educational experience for our students. To explore and, where appropriate, implement practices and programs that will enhance learning environments. We value relationships that broaden learning opportunities. We look to offer challenges that develop problem solving skills to prepare our children for what lies ahead.

We also believe it is our obligation to lead by example.  Our experience with Biodiesel exposed us to a number of innovative and effective strategies that helped us become more energy efficient. To put it simply, our use of Biodiesel was a catalyst for change. We have embraced an “all the above” approach to our energy needs. This model also holds substantial educational benefits for our students. We now use our fleet, facilities, and systems as “learning labs.” It is truly a thrill to see how engaged our students become when we answer their questions by using “real world” problems with resources that are literally at their fingertips. As an example, I recently had the pleasure of sharing some information about our Biodiesel program to a group of fifth grade students. During the discussion, a student raised his hand to ask a question. He said to me, “Mr. Biluck, I was researching Biodiesel and is it true that if the production process is done incorrectly you end up with a surfactant?” I replied, “Do you know what a surfactant is?” “Soap” was his reply. “Yes,” I replied. “If you don’t follow the process correctly, you wind up with a batch of soap.” Knowing our students are interested in our renewable fuels program enough to do independent research is very rewarding.

Based on the success of our Biodiesel program, the district now utilizes a number of bio-based products such as cleaning products, carpet, parking lot striping, and wall paint. These products reduce the exposure of staff and students to hazardous chemicals. We have also partnered with a number of these bio-based manufacturers to provide workforce experiences for our students.

Over the past nineteen years, our school bus fleet has traveled over eight million miles, each bus using Biodiesel. This equates to a cost reduction to fleet operations of roughly $170,000 during that period. This cost reduction is a result of Biodiesel’s properties (i.e., higher octane rating, higher lubricity), reduced exhaust soot, and higher oxygen content. Those properties extend the life of the fuel system and related system components. The results of our latest Biodiesel bid will allow Medford Township Public Schools to purchase Biodiesel for the same price as ultra-low diesel fuel.

Cold weather performance was an issue for the biodiesel industry in the beginning; however, the industry’s response was swift and effective. Standards ensuring the fuel’s cold weather performance were established. Protocols for the transportation and handling of the product were developed and distributed. Production modifications to remove constituent contaminants, such as cold filtering, were also implemented.

Our K-8 district is in a suburban/rural community located in southern New Jersey in an area known as the Pinelands. Our buses travel and transport roughly 3,400 students daily in some semi-remote areas. We cannot afford to have our buses breakdown in cold weather due to poor fuel performance. If Biodiesel performed so poorly during the winter months that we experienced a high fail rate, the Board, and I, would not have permitted its use.  Because of production improvements and proper fuel management, the district’s Biodiesel school bus fleet has not experienced a disruption of service for the past nineteen winters.

Going back to my opening statement, the reason that driver apologized is this…she initially did not believed that Biodiesel would have any meaningful impact. She believed it would cause more problems. As a driver of our handicapped students, she transports our most vulnerable children. After several weeks of using the fuel, she shared with me the following story. During the winter months, her wheelchair bound students are loaded and unloaded while the bus is running to preserve the heat in the school bus. Prior to changing the fuel, the exhaust from her diesel bus would irritate one of her children who had respiratory difficulties. She informed me that roughly a month after switching to Biodiesel there was a noticeable difference in that child’s breathing during loading and unloading. That child no longer struggled to breathe. The only change was using Biodiesel. That child was not concerned with facts and figures. Reducing a daily struggle was far more important.

As a district, Medford Township Public Schools’ mission is to make decisions that improve the educational experience for our students. There is no question that Biodiesel and our sustainable strategies work together to satisfy that mission.

Making this one simple, but significant, change demonstrated leadership, reduced our environmental impact, improved our operations, reduced our costs, broaden the educational opportunities for all of our students, and made one student breathe easier.

Recently retired as the Director of Operations and Technology for Medford Township Public Schools, Mr. Biluck has twenty-seven years of experience in the field of educational support services and operations. His involvement with alternative transportation fuels and renewable energy technologies began in 1990. During this time, he has worked closely with local, state, and Federal officials and private sector firms to demonstrate the viability and benefits that sustainable strategies can bring to school districts. Mr. Biluck’s knowledge of these technologies has resulted in the adoption of a variety of innovative programs that has allowed Medford Township Public Schools to realize considerable opportunities to reallocate existing dollars to support their educational goals.

For their efforts, Mr. Biluck and Medford Township Public Schools have received recognition from a number of organizations. He is the recipient of the of the 2007 New Jersey Governor’s Environmental Excellence award in the “Environmental Leadership” category. The district received the same award in the “Innovative Technology” category. Mr. Biluck is the recipient of the 2005 National Biodiesel Board’s “Eye on Biodiesel” award in the “Inspiration” category and was named the 2002 “Alternative Energy Pioneer” by the National Clean Cities program.

Mr. Biluck is now CEO of GrāMin Consulting Services, LLC. He can be reached at 856-255-5811 or jbiluck@graminservices.com.