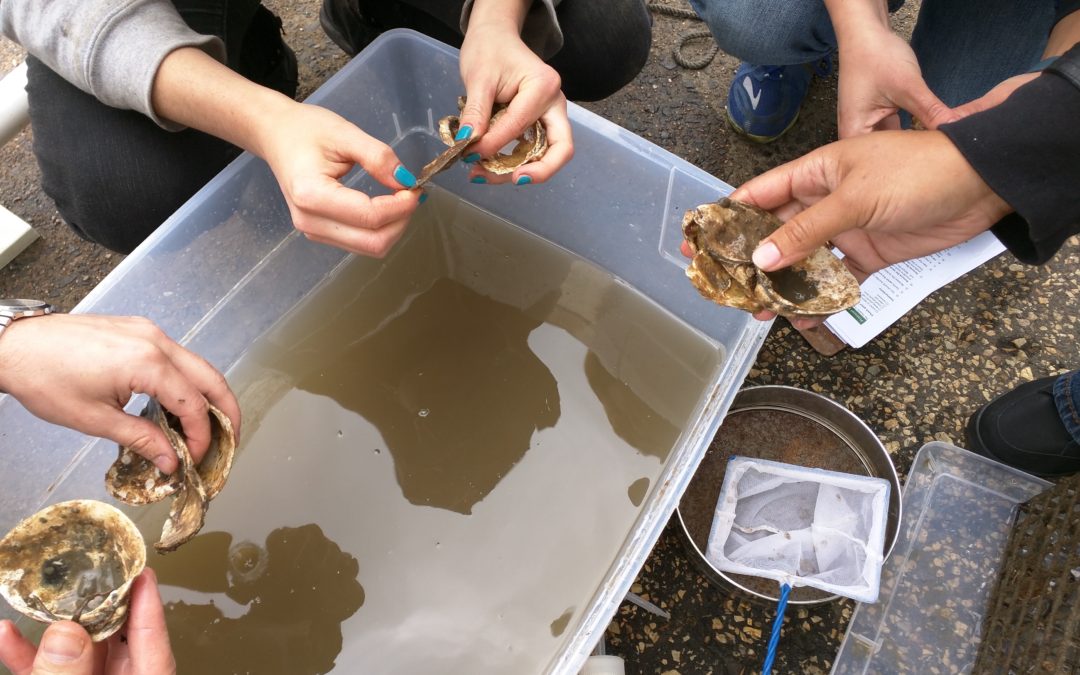 By. Heather Flanagan, Project Coordinator for Communications for the Billion Oyster Project Curriculum and Community Enterprise

“I picked the wrong day to wear white sneakers,” a student sighed, while holding a tagged oyster shell in one hand and a squirt bottle in the other.  Undaunted by either her sartorial choices or the light rain, she and a classmate continued to rinse off the shells so they could get right to their group’s task – finding out if their “spat-on-shell” juvenile oysters had grown since their last visit in December.  Calipers in hand, the students carefully noted and recorded the length of each juvenile.  “That’s nasty,” one girl said, poking a gloved finger at a mud and algae-covered shell.  The girl in white sneakers came to the oysters’ defense: “No it’s not.  It’s nature!”

These young oyster researchers were not at a beach or an aquaculture farm- they were at Pier 5 of Brooklyn Bridge Park, where their sixth grade class, lead by teachers Rachelle Travis and Judith Alexander-Edwards, had been busy growing oysters in a cage dangling into the East River since 2015.  Their school, Dr. Susan S. McKinney Secondary School for the Arts, is one of 57 public middle schools in New York City participating in the Billion Oyster Project Curriculum and Community Enterprise for Restoration Science (BOP-CCERS), a partnership of nonprofits, universities, and the New York City Department of Education, funded by a grant from the National Science Foundation.  BOP-CCERS emerged from the work of the New York Harbor Foundation’s Billion Oyster Project (BOP), an ecosystem restoration and education project aimed at restoring one billion live oysters to New York Harbor and engaging hundreds of thousands of school children through restoration-based STEM (Science, Technology, Engineering, and Math) education programs.

Why oysters?  Historically, oysters were the keystone species and original ecosystem engineers of New York Harbor.  Oyster reefs once covered more than 220,000 acres of the Hudson River estuary, containing billions (if not trillions!) of individual oysters.  They provided valuable ecosystem services to the region by filtering water, providing habitat for other marine species, and attenuating wave energy.  Today, oysters are functionally extinct in the Harbor as a result of overharvesting, dredging, and pollution.  The absence of oysters has impaired the estuary’s ability to clean the water and absorb excess nitrogen.  The loss of reefs has reduced protective habitat, destabilized the sea floor, and left the shoreline vulnerable to destructive wave action. BOP aims to reverse these effects by bringing oysters and their reef habitat back to New York Harbor.  Restoring oysters and reefs will, over time, restore the local marine ecosystem’s natural mechanisms for maintaining itself, resulting in cleaner water and greater biodiversity.  Moreover, BOP believes that by engaging students and the general public in this work they will build a culture of stewardship and a more robust understanding and appreciation of the Harbor for future generations.
Since the number of wild oysters in New York Harbor has declined so severely, a major component of BOP-CCERS is a two-year fellowship for middle school teachers (like Ms. Travis and Ms. Alexander-Edwards- currently 41 teachers at 23 different schools) that equips them to train their classes how to monitor and maintain an “oyster restoration station.”  The oyster restoration station is a multi-part cage that houses the naturally stationary oysters, plus “settlement tiles” for sessile (immobile) organisms like barnacles and anemones, and a mobile trap for the many species of fish, shrimps, and crabs found in the Harbor.  Since oysters grow best attached to other oysters, BOP collects shells from New York City restaurants and uses them as “substrate” for larval oysters to attach to.  Once attached, these juvenile oysters become known as “spat-on-shell,” and they are ready to start their new lives in the restoration stations. 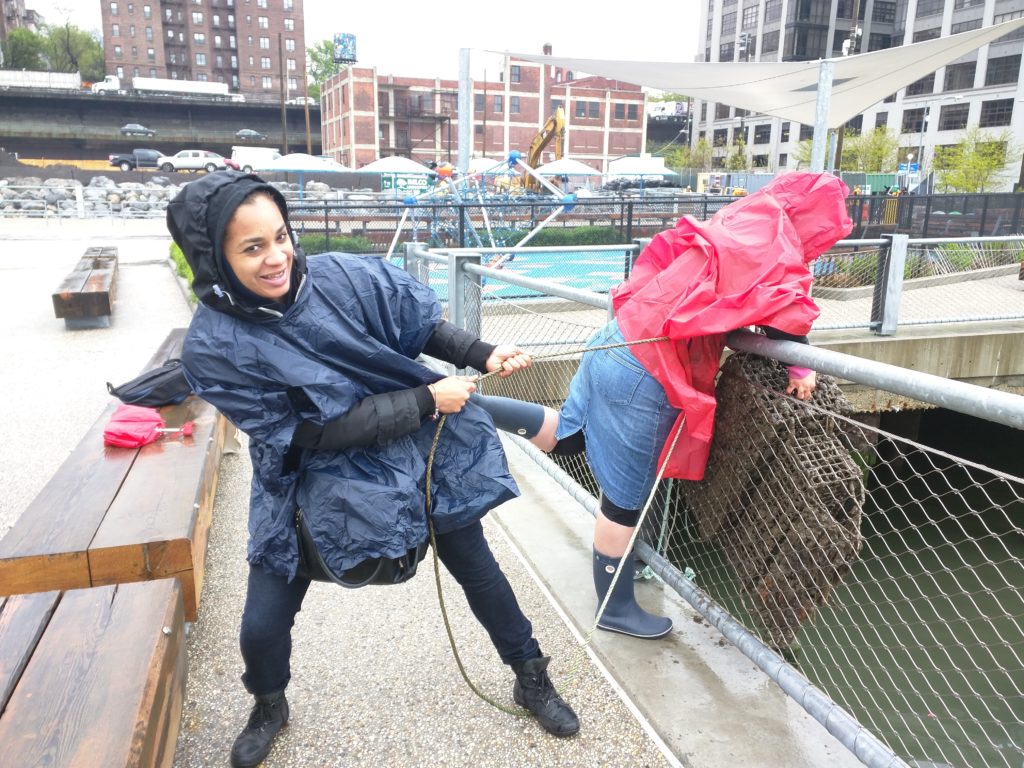 For teachers, year one of the fellowship includes monthly colloquia at Pace University taught by scientists from Columbia’s Lamont-Doherty Earth Observatory, New York Harbor Foundation staff, and guest experts, plus field trainings at partner organization The River Project, a Hudson River-based marine science education and research facility with a thirty year history of urban watershed education.  In year two, teachers take their classes to their oyster restoration stations (click here to see a map of locations) at least four times a year while regularly teaching an oyster restoration-based curriculum.  Once there, the students engage in hands-on, authentic field science following one (or more) of five protocols from the BOP Restoration Station Protocols.

An oyster restoration station visit is a fantastic sight to behold- it is a real testament to the intelligence, thoughtfulness, and empathy urban teenagers exhibit when they are given a real chance to do real research.  At any given point in a field site expedition, one group of students will be capturing data about site conditions using challenging equipment like sling psychrometers (for humidity) and anemometers (for wind speed and temperature), while another measures water quality parameters like dissolved oxygen, salinity, pH, ammonia, and nitrates.  Students, like the girls from the beginning of the story, might be measuring oysters or they might be gently swishing water from the mobile trap through a sieve to count and identify grass shrimp, mud crabs, or blackfish, being careful to “rescue” and properly handle the living organisms (the oyster restoration station kit comes with several tubs and an aerator to keep these larger animals safe while they are out of the Harbor).  Still others are carefully inspecting the settlement tiles soaking in shallow bins, nose almost to the water, noticing feathery hydroids, tiny barnacles with even tinier “legs” just barely visible, and black, yellow, and gold tunicates growing in colonies looking, as Ms. Travis put it, like buy ambien online “reptile skin.”

Students love these trips to the oyster restoration stations.  Even the mere mention of an upcoming field expedition was enough to send fellow Jack Wasylyk’s class at M.S. 88 into an eruption of “YES!”, and his students were eager to talk about their visits last fall.  Maciel Rosario and Caylyn Cortes, students in Mr. Wasylyk’s first period class, excitedly recalled the event, completing each other’s sentences.  Caylyn started, “Earlier in the year we went to Red Hook…to the harbor so we could catch [the oysters] and put them in tanks.”  Maciel continued excitedly, “We also caught other species, like fish and crabs and shrimp.  Remember the thing that looked like alligator snakes?  It was so fun when we got there.  It was like a hard working day but it was so fun.  Everyone had different tasks.  There was this old cage- they use it every year to check oysters- it was my task to bring up the cage and check the tiles to see if there were baby oysters or bacteria growing on it…I also had to find new animals, new species to bring back.  I had to put them in the tank and a crab almost bit me!  We brought like 30 [oysters] – you know how there’s oyster drills [a small predatory snail]?  They killed [some of] them.”

Almost every student in Mr. Wasylyk’s classes used the word “fun” multiple times to describe their experiences at the field site.  Angel Diaz from Mr. Wasylyk’s second period class said, “It was fun seeing oysters in their cages.  Testing ammonia – oyster poop.  I looked at animals in the water, like the sea squirt, the common one.  It’s fun learning what they can do in the water, like clean [it.]”

Reflecting on her class’ reception of the project, fellow Emily Chandler of P.S. 371K explained, “I have been teaching in a district 75 special education classroom for students with emotional disturbance for 10 years…It’s very exciting for staff and students to be real scientists conducting field research and helping the local environment…and I find that it’s motivating for students who don’t have the best track record in a ‘normal’ classroom environment.  The first time I took my students to the restoration station, I was nervous about corralling kids and about whether we’d have decent attendance for the trip. Attendance is the biggest concern with my students, who don’t always buy-in to their schooling. I was so proud and elated when the attendance for the trip was 100%; and I knew that BOP was going to be a crucial tool for drawing students’ interest in my environmental science class.”

In addition to the field site visits, BOP-CCERS students are highly engaged by the interdisciplinary, hands-on curriculum written by New York Harbor Foundation curriculum specialists Ann Fraioli and Audrey Federman, as well as restoration education lesson plans developed by the teachers themselves.  An integrated math and science activity called “Can You Outfilter an Oyster?” challenges students to build contraptions that can filter “harbor water” (a mixture of tap water, potting soil, food dye, soap, and oil in lieu of the real thing) faster than an oyster.  Other lessons address English Language Arts and Social Studies standards by using primary sources that get students thinking and writing about New York Harbor history.  Students also prepare for, practice, and extend the field site protocols in the classroom, studying species ID charts, measuring water quality parameters, dissecting oysters, and more.

Some teachers extend their BOP-CCERS work even further by bringing an aquarium full of oysters and other estuary species into their classrooms.  Oysters make a pretty forgiving “classroom pet,” and students are very eager to do everything from changing the water to checking ammonia levels to feeding the oysters dropperfuls of algae.  The in-class tanks further invest the students in the field work, and teachers have found there is no better way to demonstrate the oyster’s ability to filter the water than to watch as a murky tank grows clear in just a couple of hours.

The BOP-CCERS fellowship culminates in a special end-of-year event, the annual Billion Oyster Project Research Symposium.  Teachers, students, scientists and citizen scientists, and partner organizations come together at BOP’s headquarters on Governors Island to share knowledge and celebrate the outstanding work of BOP students.  The students present posters of their research, participate in oyster shucking lessons, and listen to a restoration science keynote address. This year, the students will also attend a live performance of the acclaimed oyster musical Salty Folk.

BOP has a ways to go before it hits one billion oysters – right now the count is about eleven million – but with the help of BOP-CCERS students, teachers, and their communities, the health of the Harbor is in good hands!

Heather Flanagan writes and creates digital content for the New York Harbor Foundation as the Project Coordinator for Communications for the Billion Oyster Project Curriculum and Community Enterprise (BOP-CCERS).  She designed and maintains the BOP-CCERS Tumblr, writes the BOP-CCCERS e-newsletter and BOP-CCERS posts for the Billion Oyster Project (BOP) website, and contributes to BOP’s Facebook, Twitter, and Instagram accounts.  Heather is also a School Programs Educator for the Brooklyn Historical Society at BLDG 92 at the Brooklyn Navy Yard, a former naval shipyard turned sustainable industrial park, where she teaches school groups and afterschool programs about sustainability, waterfront technology and history, and the experiences of women and African-American Navy Yard workers during WWII.  This summer she will be the lead educator and curriculum designer for BLDG 92’s STEAM program, in which students will learn about urban environmental issues and engage in a hands-on reuse project.  Heather received her B.S. in English Education from New York University and she lives and gardens in Red Hook, Brooklyn.