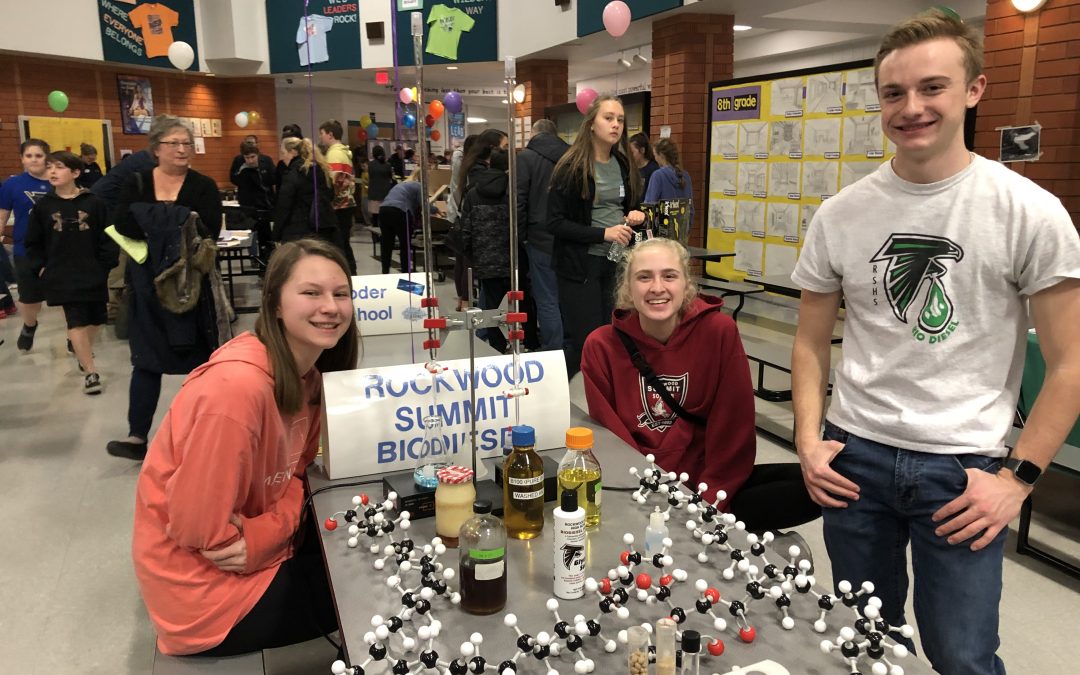 It was early in the spring semester of 2009. I was teaching a unit on hydrocarbons in my Organic Chemistry class at Rockwood Summit High School in Fenton, Missouri. During a class discussion about hydrocarbons as a fuel source for vehicles, I mentioned a local news story about a man who was converting restaurant grease into diesel for his 1980s Mercedes. The next day, one of my quieter students met me in the hallway outside my classroom with a two-inch stack of information on biodiesel she downloaded from the internet. As she entered the room, she looked up at me, smiled, and handed me her stack of papers. “Mr. Peters,” she said, “could we do this as a lab?” I accepted the papers and said that I would look at it and get back to her. I read through the material she handed me after class and knew this was a learning opportunity we couldn’t pass up.

The lab procedures for biodiesel dovetailed nicely with the curriculum for organic chemistry. I collected some waste oil from local restaurants; the class then converted the grease into biodiesel and glycerin using the information their classmate had provided. The students were excited they had made biodiesel, but they wanted to know how good their sample was. We connected with a chemistry professor at the University of Connecticut who agreed to test their fuel. The results were very good! He wrote a nice email to the class on how impressed he was with the sample and that it was one of the best he had seen in a long time. This motivated my students like nothing I have seen in my career. They began to petition me for bigger and better things concerning biodiesel. They wanted their own biodiesel processor and diesel vehicle to test their fuel with. They wanted to power the school buses and anything diesel that the school district owned. I began to write grants for these purposes. The first grant we received was for $5,000, which we used to purchase a small biodiesel processor and a 1991 Dodge Ram D350 Diesel pick-up truck. The students were overjoyed, and we were on our way.

I knew more students would want to get involved with the biodiesel project besides my Organic Chemistry students, so we formed the Biodiesel Club, which meets after school on Mondays. Soon, there were too many students to manage by myself – a good problem to have! Our school’s technology correspondent, Bob Schaeg, volunteered to help out. He had prior experience as an automotive tech and was perfect for the role. Bob helped the kids interested in automotive and technology and I helped the kids with chemistry.

As the Biodiesel Club and the number of Organic Chemistry sections grew, Bob, myself, and the students continued to write grants and seek support from our community. The community has been happy to oblige – a member of the St. Louis Area Mercedes Club gave us a 2000 Volkswagen Jetta TDI for students to work on. However, it was becoming apparent that we needed a space of our own to produce biodiesel, work on our vehicles, and educate our students and community on the potential of renewable fuel. In 2014, our dreams came true. Monsanto awarded us $100,000 to build the Monsanto Education Center for Sustainable Solutions (MECSS) on Rockwood Summit’s campus.

Over the last 10 years, my students and I have learned a great deal how real-world applications can be used to teach STEM. Each spring semester, the Organic Chemistry classes develop procedures to turn waste vegetable oil collected from our community into high-quality biodiesel and glycerin soap. They must do the research, write up the experiments, and present their findings to their community. The students work in pairs and collaborate with their classmates on which methods work best to produce and purify their fuel. They must be able to explain the chemistry behind their procedure to earn the best grade. Their procedures and conclusions are kept in lab journals that they turn in from time to time. At the end of the semester they present their findings to a local school or group. Presentations can be used as a test or lab grade, whichever they choose.

The Organic Chemistry biodiesel project keeps students motivated for several reasons. First, students are solving a real-world problem that concerns all of us. What will happen when we run out of petroleum? Giving students an opportunity to solve real-world problems gives them a sense of purpose and accomplishment. It doesn’t take them long to figure out biodiesel is carbon-neutral, which helps reduce the concentration of carbon dioxide in the atmosphere. They also want to know as much as possible about what they are learning since they present to an audience at the end of the semester. I have found teenagers do some of their best work if they know in advance they will have to teach people what they have learned. Biodiesel Club students have used this project to further their learning, too. Several club members have designed their own experiments or research using the biodiesel project and entered science fairs and engineering competitions. Two of my former students spent a number of hours after school redesigning the biodiesel processor so that it’s computer monitored and controlled. They each earned presidential scholarships for their work. Last year, two of my Biodiesel Club students earned awards at the local science fair for experiments linked to the biodiesel project.

For the last few years, my students and I have reached out to our community as a STEM education resource. We have a curriculum that aligns with the Next Generation Science Standards and offer field trips to the MECSS building for area schools and educational groups. Sometimes schools rather that we come to them. Ranken Technical College made that possible by building a mobile STEM educational trailer based on biodiesel. The truck that pulls it is a 1992 Ford F250 named “Old Brownie.” Brownie was gifted to us by our friends at the Missouri Soybean Merchandising Council about four years ago. To help coordinate this educational outreach, the Missouri Soybean Merchandising Council granted our biodiesel project funds to hire an assistant. He is a senior at Rockwood Summit and his name is Corey. The last place we pulled the trailer was New City School in St. Louis. Corey and I taught over 100 students throughout the day on the benefits and potential of renewable fuel.

The past 11 years have been a blessing for me and my students. We continue to improve our educational activities and our fuel. We hope to one day sell our biodiesel to the community. How much more real world can that be? This project would not be possible without the generous support of our community and our numerous grant providers. We are so thankful for everyone’s contributions.

Darrin Peters lives with his wife of 29 years, Stacy, in Fenton, Missouri. Darrin and Stacy met while attending Missouri State University. They have two daughters, Lauren and Alyse. Lauren works as a nurse and lives with her husband Ben in Nashville, Tennessee. Alyse is a junior at Missouri State University studying microbiology and biochemistry. Darrin has been a resident of Fenton since 1978. He has taught science in Missouri for the last 28 years, 24 of those at Rockwood Summit.