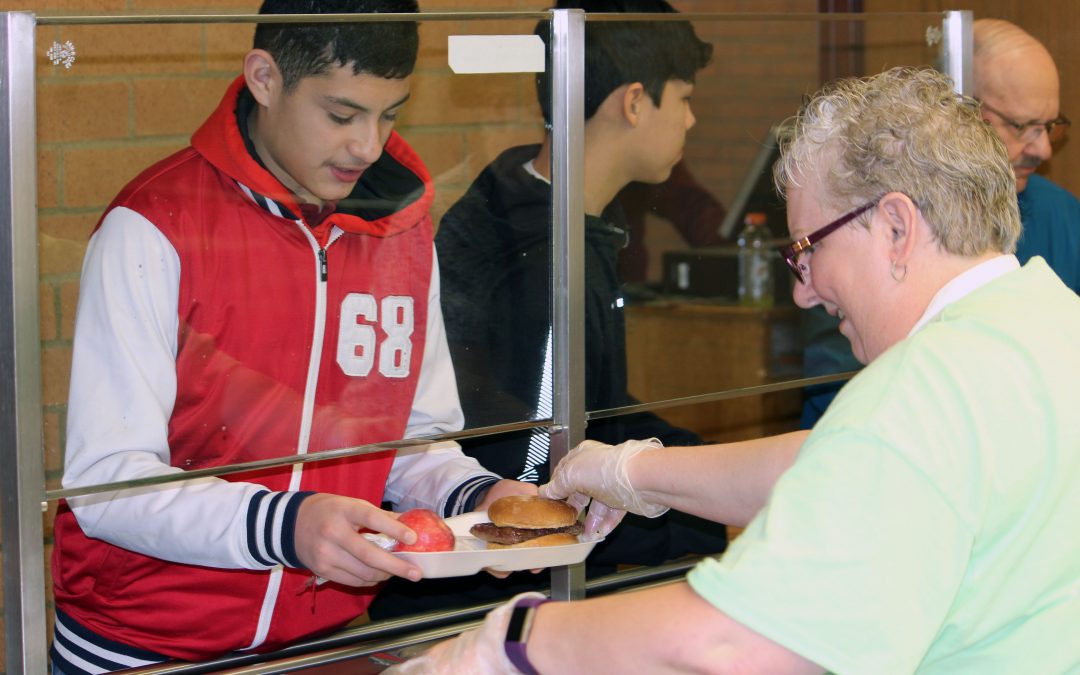 Students at Lost River Junior-Senior High School in Merrill, Oregon know where their food comes from. They eat beef from their own steers, eggs from their own chickens, and tomatoes raised in their greenhouse.

In October 2018, school cooks started using beef from two of four steers raised by Lost River FFA students in hamburgers, tacos, spaghetti sauce, and other meals. They’ve been cooking with eggs from the school’s 100+ chickens since 2018 too, and in early fall they use tomatoes, herbs, and other produce grown by students.

The students notice. “The hamburgers are bigger and better tasting,” says sophomore Rorie Cerri, “and they’re probably healthier and a lot less processed. And having our own eggs is pretty cool. It’s never as good if it’s not farm fresh.”

The first two steers provided the school with enough beef to last about one semester. The second two steers were finished out in April. The beef they provide is being used to kick start the 2019 – 2020 school year. With more than a dozen sheep, several of which are due to give birth in late January to early February 2020, students will be part of the lambing process and many will show the offspring at the local county fair.

The process of raising and harvesting food for a school cafeteria is stringent and must meet the National School Lunch Program’s standards, but Jamie Ongman, principal at Lost River Junior-Senior High School, says it’s worth it.

More students are eating breakfast and lunch – the school’s cafeteria is serving on average 20 to 30 more meals a day since October 2018 when it began serving the school-raised beef.

“Our kids get nourishment for the rest of the day, and they get to see the end product of what they raised and how we use that,” says Ongman. “Cost aside, the benefits of kids eating a quality meal that meets national school lunch standards and being proud of what they’ve done is worth any money we have to spend to get (the steers) processed.”

Credit goes not only to FFA students, but to Meghan Miller, agriculture science teacher and FFA advisor, who started working at Lost River in fall 2017. Miller pursued the grants and community support needed to raise and harvest the steers and purchase feed and equipment. She applied for and received a $3,000 National FFA Living-to-Serve grant, which jump-started the program, and has pursued other grants and community support for the school. She also brought chickens to start the school’s coop.

Since then, with help from the community, Lost River Junior-Senior High School has built a barn, replacing one that was destroyed by fire 15 years prior, and installed an underground main irrigation line to the small pasture on campus. Students helped the district’s maintenance crew put finishing touches on the barn, building and installing doors, digging trenches, pouring concrete, and finishing electrical and plumbing work. Corrals, designed and built by students, are scheduled to be painted this fall. Next up is planting the long-furrowed pasture area so the school can provide grazing space for its farm animals.

“It’s quite remarkable what Meghan’s done, and it just gets better and better,” Ongman says. “She has really brought an initiative, a vision, and a mission for kids to be a part of and the kids have responded. It’s really reinvigorated our students,” he adds. “In our community, everything’s driven by agriculture, and being able to provide learning experiences for our kids in that industry is huge.”

The community responded by throwing its support behind the school’s farm to school initiatives. Once news got around about Miller’s plans for her $3,000 FFA grant project, Dunlea Farms and King Ranch stepped up and each donated two steers. Walker Brothers and Patterson Farms donated hay. Winema Elevators donated grain. Other community members donated two pigs that live in a pen on the school’s campus. Numerous businesses and other organizations donated supplies to build the corrals and make the new barn a true learning laboratory.

“The community allowed us to stretch those dollars even further, which was a blessing,” Ongman says.

Over the past two summers, ranchers and farmers offered to keep the sheep and steers on their pastures. When some of the calves got sick – suffering from bloat – local ranchers volunteered to help agriculture science and FFA students treat them, using remedies that still allowed the beef to be served in the school cafeteria, instead of high-powered antibiotics.

Grant money was then used to buy any needed feed and equipment for the cattle, lambs, pigs, and chickens, including panels, a feed trough, water troughs, and numerous other supplies. Miller is in the process of applying for a third National FFA Living-to-Serve grant in hopes of continuing to grow the program. A Northwest Farm Credit grant of $4,500 helped with funding the main irrigation line from an irrigation pump to what will soon be an established pasture. Oregon Pathway Funding for CTE (Career and Technical Education) programs helped to fund the rest of the $7,000 project.

Ongman believes that the education component of raising calves for meat is tremendous and he credits Miller for providing those opportunities for students. In addition, he states that “there was a lot of cross-curricula education that went into it because students had to figure out daily rate of gain and feed rations, and when they get to a finished weight.”

Colton Wright, a junior and FFA officer, is involved in the farm to school programs. He says that “FFA has broadened my learning and showed me everything I could do in agriculture.” He hopes to one day start his own agriculture chemical company and get his pilot’s and crop duster’s licenses. He also likes the outcome: “It’s cool to know the breakfast we eat in the morning is from eggs our chapter has grown.”

Miller is thrilled with the support and results so far. “A year ago, there was a lot of nothing here,” and “the greenhouse wasn’t functioning” she states, motioning to the land adjacent to the rural campus. She says that the area “was basically a blank slate. There was nothing but weeds. But now we have a chicken coop, we have a barn built. By springtime, we will have a pasture and working irrigation with a corral for practicing showmanship and a place for kids to keep their animals.”

Miller also hopes to breed the two pigs so students can see the farrowing process. The offspring can then be used for student fair projects or possibly go into the school cafeteria as well. Last summer, ten students bought lambs from the FFA chapter and raised them for Klamath County Fair projects. Overall, last year, Lost River Junior-Senior High School doubled the number of students who raised and marketed animals for the fair.

“They raised them to market ready, took them to the fair, and sold them,” she says. “It’s more than just for students to see the hands-on piece of actually raising the animals. They also learn the business behind it.”

Meghan Miller is an agricultural science and technology instructor and FFA advisor at Lost River Junior-Senior High School in Merrill, Oregon. Meghan is starting her eleventh year of teaching for Klamath County School District where she has taught a wide variety of classes, including introduction to agriculture, animal science, plant science, agriculture leadership, agricultural mechanics, and more. Her passion is not only educating today’s youth about agriculture, but to do it in a manner that brings service leadership and hands-on learning to the forefront. Meghan also farms with her husband on her family’s farm.