From Sit Spots to Skits: Fostering Empathy and Compassion through Place-Based Education 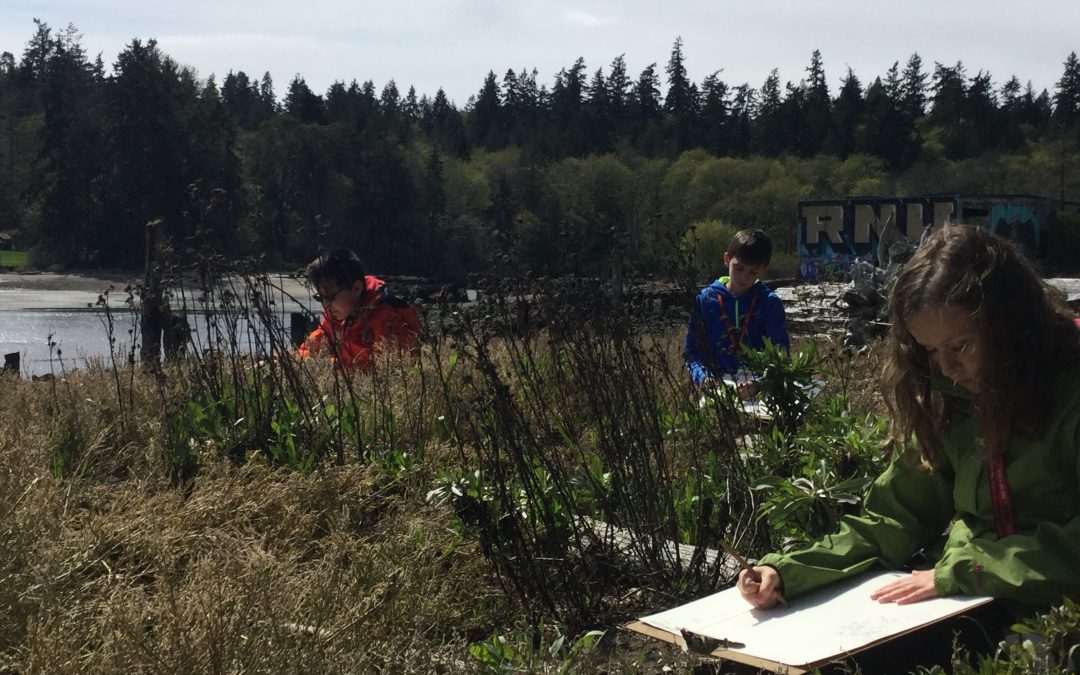 In recent decades, mainstream environmental education has become what writer and educator David Sobel calls “catastrophe education,” putting much of the focus on habitat destruction, endangered species, and climate change (2004). While these are topics of great concern, they are often taught to children in ways that further alienate them from the natural world. Many children feel the weight of these issues before they have had a chance to intimately know nature on a personal level, to play in and be curious about the landscape of their home community.

By shifting the scale of environmental education to be more personal and familiar, it also becomes more accessible and inclusive. A more holistic and locally rooted form of education honors the human and ecological context of a place and also helps better address student learning from a developmental perspective. Place-based education takes the big concept of environmental education and brings ecological understanding to the context of individuals and communities in a particular geographic setting. In doing so, it helps students develop a sense of place, as well as compassion and respect for the people, plants, and animals that inhabit it.

In considering how to keep my own teaching centered on these ideas, it was natural for me to think about scale. Mapping is a simple and adaptable way to translate concepts across space and time. Sobel (1998) and later Audrey and Linsey Mohan (2013) have advocated for an approach to spatial and place-based learning called the “expanding horizons” framework. Their ideas focus on mapping with children but can be applied to other settings as well. The main concept is to teach students from the inside out, first learning about places familiar and close to the heart such as the home and schoolyard before slowly expanding to the community, the local region, and beyond. 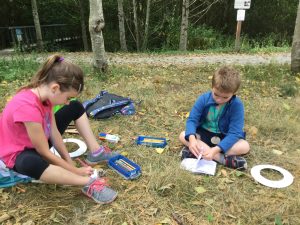 It felt intuitive to think this way while working with fourth- through sixth-grade students at IslandWood, an outdoor school focused on science and social-emotional learning. A common routine during my teaching week was to start by introducing students to their own personal corner of the forest: their sit spot. This is a place where students can learn directly from nature through their own observations. From there we’d journal and share our experiences as a group, sometimes creating maps, drawings, and stories of our special places. Over the course of the week together we’d often document and compile similar kinds of experiences occurring in other locations as well. Sometimes this synthesis looked like collaboratively created maps, other times it would consist of comparing and contrasting different ecosystems to find common threads.

I constantly wrestle with how to help make this type of learning experience more relevant and meaningful for students. Certainly there is value that comes from learning in the woods for four days as students begin building a connection to that particular place, but what happens when they return to their neighborhood at the end of the week?

As I began playing with ideas for lessons to address this question, I found myself coming back to mapping. I developed a lesson that evolved over several weeks and across many different field groups. My students and I started using mapping to explore the story of place not at the outdoor school, but in their home neighborhoods. Since most of the students came from in or around Seattle, it felt natural to start there.

By studying and comparing maps of the past and present, we looked at the lowering of Lake Washington from the construction of the Ballard Locks in 1916, the contemporaneous dredging and straightening of the Duwamish River, and changes to other landforms. These are features of the landscape that many of these kids know well. Weaving layers of social and ecological context of the place with students’ prior experience helps build personal meaning and relevance.

In one iteration of the lesson, I asked my fourth-grade students that week to place themselves into the perspective of someone or something living through those changes to the land and the water of Seattle. The students created stories, comics, and skits to show how different communities have worked through change. By asking students to view a historic event from another’s perspective, they were practicing skills of empathy and critical thinking. They were able to think through what it might have been like to work through the challenges of that particular time and place. This activity also allowed them to practice ways of facing challenges that might come about in their own lives.

Taking on new perspectives to act out stories of place. source: Tom Stonehocker

A group of three students chose to act out the story of how the lowering of Lake Washington and the straightening of the Duwamish River affected communities around the Black River. The scene began as two of them acted out the dredging process. Anya* played a steamshovel being directed by a worker, portrayed by Kate. Kate used Anya’s long braids to direct her as she dug away the gentle meanders of the Duwamish River scoop by scoop. Kate’s character was overworked, trying to support a family that she hadn’t seen for days.

Kira the narrator closed the first scene saying, “I wonder how the native people feel about this…”

In the next scene, Kate and Anya portrayed a Duwamish child and her mother. The child upon seeing the destruction of the river rushed to her mother in alarm to share the news. What followed was a heartbreaking conversation about loss and uncertainty about the future of the community.

In the third and final scene, a conversation took place between the worker and the Duwamish woman. “Our community has lost the river, our source of life and food,” said the woman, played by Anya. “I was just doing my job,” responded Kate, again playing the worker.

Eventually both parties conceded that everyone involved was in a difficult position. After the conversation, there was more understanding, even though the issues hadn’t necessarily been solved.

Kira the narrator closed by saying, “Unfortunately, the Black River is still gone to this day. It is now land and always will be…”

The story ended seemingly without conclusion, but captured the very real non-closure that comes from such monumental change to a place. We are still seeing the effects of those changes today.

In their story, these students perfectly illustrated how humans and the landscape are inextricably linked. This is the idea at the heart of place-based education. While their skit clearly demonstrates what they learned about Seattle history, the most compelling part for me was how the emotional and empathetic content of the skit revealed their connection and concern for their place, as well as a curiosity to apply their learning to new scales.

The best way to make meaning of the world is to start close. Focusing on global environmental and social issues without connections to local people and places can lead to misconceptions and even alienation. Learners are more equipped to understand big ideas when their experiences are rooted, meaningful, and near to the heart. They are also more likely to nurture the compassion and empathy that is needed to care for these places and the humans and non-humans who inhabit them. By approaching place-based education with these ideas in mind, educators not only become more intuitive, but also more responsive and inclusive.

*names have been changed to protect student identities

Tom Stonehocker is a lifelong naturalist and new educator currently completing a Master of Education at the University of Washington. He is a recent graduate from Islandwood’s Education for Environment and Community Program, where he lived, studied, and worked as a field instructor on Bainbridge Island, Washington.