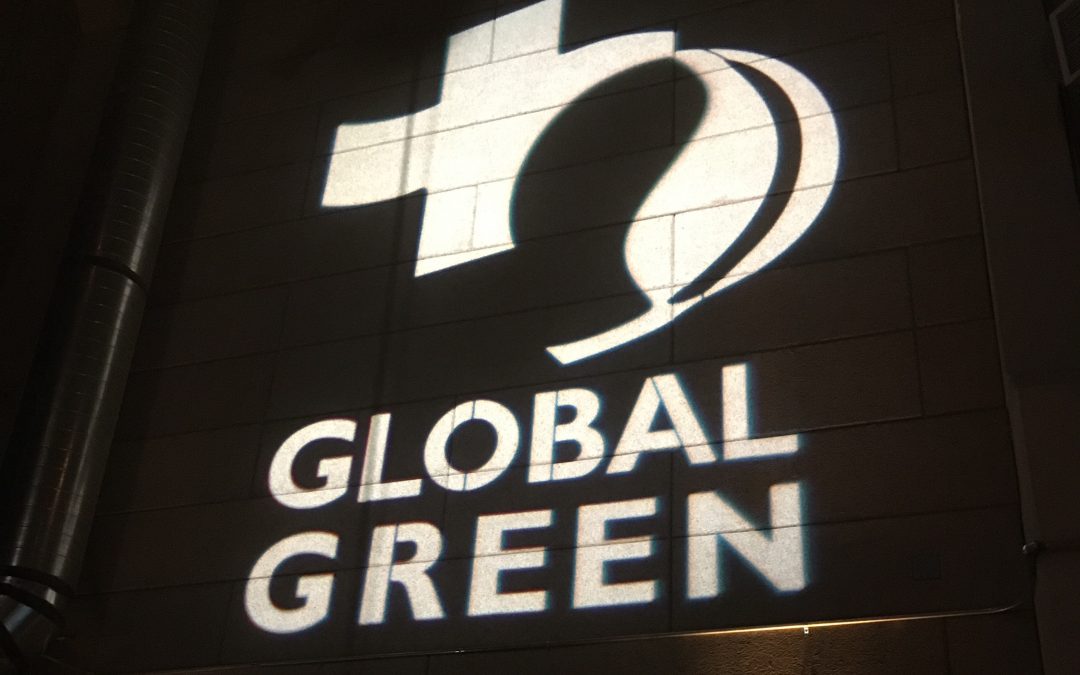 A movement cannot rely on just one person or organization to grow and create change in the world. It requires many helping hands, working together, lifting each other up. At the Green Schools National Network (GSNN), nurturing long-lasting, meaningful partnerships with other like-minded people and organizations is a fundamental part of who we are. It is written into our core principles and embedded in our mission to ensure every child attends a green, healthy, and sustainable school.

One like-minded organization that we are nurturing a partnership with is Global Green. Global Green is a national leader in advancing smart solutions to climate change that improve lives and protect our planet. A primary focus of their work is on developing sustainable communities – and, as we know, schools play a central role in binding a community together.

Recently, Global Green showed its appreciation for GSNN’s work in a big way. The organization invited Dr. Jennifer Seydel, GSNN’s Executive Director, and Bridgitte Alomes, GSNN’s Board President and CEO and Co-Founder of Natural Pod, to attend its 15th annual Pre-Oscar Gala, held on February 28th, 2018. The gala celebrates and champions the efforts of leaders across the green movement, people and organizations who are taking bold steps to create positive, sustainable change in the world. Jenny and Bridgitte were honored and humbled to attend the Pre-Oscar Gala as guests of Global Green and to have an opportunity to network with some of the foremost green leaders in the world.

Jenny and Bridgitte were joined at the Pre-Oscar Gala by Dr. Alison Suffet-Diaz, GSNN Founding Board Member and Founder and Executive Director of Environmental Charter Schools (ECS). Alison is a leader herself in the green schools movement having founded a network of schools whose mission is to “equip all students with the knowledge and skills to graduate from college, to inspire them to discover their own sense of purpose, and to empower them to become quality stewards of their community and world.” In fact, 98 percent of ECS graduates complete with the coursework necessary for admission into a four-year college or university. ECS is the recipient of numerous awards and recognition, including the U.S. Department of Education Green Ribbon School Award; is ranked in the top two percent of public high schools in the United States by U.S. News and World Report; and was featured in the PBS documentary “Growing Greener Schools” as a prime model for green education. 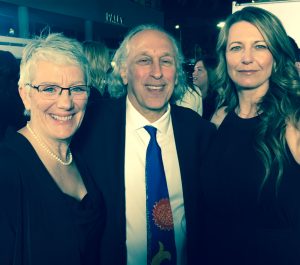 At the Pre-Oscar Gala, Jenny introduced Bridgitte to David Levine, CEO and Co-Founder of the American Sustainable Business Council (ASBC), a network of businesses and business associations that are committed to the triple bottom line of sustainability: people, planet, and profit. Mr. Levine’s interest lies in developing whole systems solutions for a more sustainable society through building strategic partnerships and broad stakeholder initiatives. Through ASBC, Mr. Levine is addressing important issues that have implications for K-12 schools, such as climate and energy, safer chemicals, clean water, and food and agriculture. His background in education (he was Founder and Executive Director of the Learning Alliance) makes him a natural ally in the green schools movement. 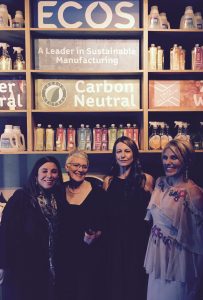 Another important connection was made with Jenna Arkin, Vice President of Innovation at ECOS. ECOS is a family-owned and operated company that manufactures plant-derived, earth-friendly cleaning products. ECOS products aren’t your run-of-the-mill green cleaners. They are manufactured in carbon-neutral facilities that use 100% renewable energy and are made using zero waste guidelines. The company is more than its products – they are also committed to empowering the next generation of environmental stewards through education. Employees bring interactive educational programs directly to K-12 schools and host field trips at their facilities so that students can create their own green cleaners. Their commitment to creating a safer, healthier future for all impressed Jenny and Bridgitte – both look forward to building a relationship with Ms. Arkin and ECOS for the benefit of green, healthy, and sustainable schools. 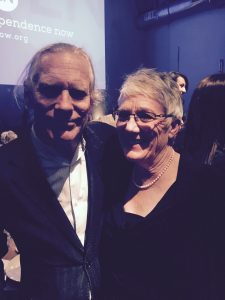 Jenny, Bridgitte, and Alison had the good fortune of meeting up with Global Green’s co-chairs, Ian Reece and Trammel S. Crow. Mr. Crow is the Founder of EarthX, the largest environmental exhibition and programming initiative in the world. The organization’s annual forum draws thousands to Dallas each year to learn about the latest initiatives, discoveries, research innovations, policies, and corporate practices that are reshaping our world. Mr. Crow is also a tireless environmental advocate, inspiring leadership across sectors and party lines. In addition to his work with EarthX and Global Green, he serves on the Board of Directors for ConservAmerica and is a Co-Founder of Texas Business for Clean Air and Texans for Clean Water. Mr. Crow was recognized at this year’s Pre-Oscar Gala with the EarthX Resilience Award.

Building a strong relationship between GSNN and Global Green’s Governance Boards is important for future collaboration, and Bridgitte and Alison were thankful for the opportunity to engage with Global Green’s co-chairs. Jenny was particularly excited to meet Mr. Crow – GSNN has been invited to facilitate a Sustainability Leadership Summit for Executive Level School Leaders on Friday, April 20th at EarthX’s annual forum and the Pre-Oscar Gala was the perfect venue for this introduction. In addition to this Summit, GSNN will be hosting a full day workshop for teachers at EarthX titled, Green, Healthy, Sustainable Schools for All. 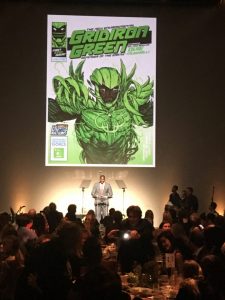 As a celebration for all things “green,” the Pre-Oscar Gala was the backdrop for an exciting announcement from former NFL Pro Bowl fullback Ovie Mughelli. Mr. Mughelli is Co-Founder of the Ovi Mughelli Foundation, a nonprofit that socially, mentally, and physically supports the overall development of youth, especially those from underserved communities. Named a Top 5 Eco Athlete by Planet Green, Mr. Mughelli provides quality programs through his foundation to educate youth on environmental stewardship. At the Pre-Oscar Gala, Mr. Mughelli announced the launch of a new comic called Super Hero Gridiron Green: Defender of the Earth. It’s the first African-American comic to focus on empowering youth to take action on green and sustainability issues. 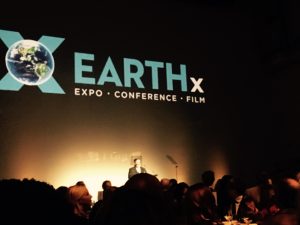 The evening was best summed up by Terry Tamminen, CEO of the Leonardo DiCaprio Foundation and one of several green leaders to speak at the Pre-Oscar Gala. Mr. Tamminen has spent over 20 years working for environmental causes, including marine conservation, climate change, and renewable energy. Prior to joining the Leonardo DiCaprio Foundation in 2016, he served under Governor Arnold Schwarzenegger as Secretary of the California Environmental Protection Agency and was later appointed Cabinet Secretary, the Chief Policy Advisor to the Governor. Mr. Tamminen oversaw many groundbreaking sustainability policies, including California’s Global Warming Solutions Act of 2006, The Hydrogen Highway Network, and the Million Solar Roofs Initiative. At the Pre-Oscar Gala, Mr. Tamminen spoke about the need for everyone to work together to create the green, sustainable future that we want.

Networking and building networks are driving forces in any movement, but they are at the heart of GSNN’s work. We are a network founded on a belief that schools should not travel on their sustainability journey alone, that there is strength in numbers. Attending the Pre-Oscar Gala was an amazing opportunity for Jenny, Bridgitte, and Alison to not only share the important work that GSNN is accomplishing within the larger green movement, but to ensure that education remains at the forefront of green and sustainability efforts. The connections made and conversations held at the Pre-Oscar Gala demonstrated that, collectively, we are committed to this work for the same reason: to co-create a more sustainable future. We at GSNN look forward to growing our partnerships with Global Green and EarthX and, by welcoming them into the green schools family, expanding our collective networks so that together we can create the change that is needed for a more sustainable world.