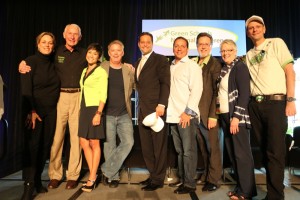 The Green Schools National Conference has come a long way since its inception in 2010. Conference attendance has risen from 900 in 2010 to over 1200 in 2015; programming has expanded to include a Student Summit as well as a series of Solutions Summits; and the event has gained a reputation as the premiere gathering for green schools advocates. And yet, the Green Schools National Network (GSNN) has always aspired for something more: more engaging programming, a larger reach, a greater dedication to growing the green schools movement. By partnering with the Center for Green Schools at the U. S. Green Building Council (USGBC), GSNN’s aspirations for the Green Schools Conference are one step closer to reality.

A Partnership in the Making

The partnership between GSNN and the Center for Green Schools started with the 2010 Green Schools National Conference. The Center was a founding partner for the conference and played a key role in pulling together the people and resources needed to ensure a successful, well-run event. At subsequent conferences, the Center’s role deepened: they were instrumental in making connections with local USGBC chapters and green schools committees in and around host cities; setting up tours; and recommending sponsors and exhibitors. Their conference and event planning skills proved to be a good match to GSNN’s programming, convening, and facilitating abilities. Most importantly, the two organizations found common ground in advancing a similar mission: to grow the green schools movement and ensure every child in the United States attends a green school within this generation.

In preparation for the 2015 Green Schools National Conference, the Center invited GSNN to meet with USGBC’s Conferences and Events team to discuss ways they could work together in a more formal manner to better promote and grow the conference. The team has great experience and a well-deserved reputation for holding large, green events. The annual Greenbuild International Conference and Expo, initially planned by the Conferences and Events team, is now the world’s largest conference and expo dedicated to green and sustainable building.

As a result of this conversation, GSNN invited USGBC to assume the role of event management partner for the 2015 conference. The two groups worked closely together and met weekly to iron out every detail of the conference. Their hard work paid off: the 2015 Green Schools National Conference was one of the strongest events yet with many positive reactions from attendees. In addition, the USGBC team balanced the conference budget, a first in its five-year history. These successes cemented the partnership between GSNN and USGBC. Starting in 2016, the conference will be powered by USGBC in partnership with GSNN. According to Jennifer Seydel, Executive Director of GSNN, “This partnership has freed up intellectual and human capitol within our small organization so we can advance a new strategic plan AND sustain the conference over the long haul. “

Partnerships work best when each party has something unique to contribute. GSNN and USGBC’s case is no exception. In addition to its conference planning expertise, USGBC has experience in developing metrics through its 20-year history with the LEED rating system, and the Center for Green Schools is currently facilitating a national conversation with thought leaders and researchers to define a set of metrics to assess green schools. The benchmarks defined in their “Measuring our Impact” Initiative will be used by GSNN to update its GreenPrint™: A Roadmap for Green, Healthy, and Sustainable Schools.

Likewise, GSNN has expertise in making connections between individuals in schools, non-profits, and corporate and public sector organizations to advance the green schools movement, as well as in transforming schools to improve student achievement through curriculum that uses environmental and sustainability literacy as a context for developing the knowledge and skills needed for a sustainable future. As a contributing author to USGBC’s “National Action Plan for Educating for Sustainability,” GSNN’s Dr. Seydel and the GSNN Board of Directors look forward to having additional time and resources to invest in communicating the unique characteristics of teaching and learning environments in green schools that distinguish them from other schools.

For USGBC and GSNN, identifying the value each organization brings has resulted in the most meaningful and highest impact partnership. Both organizations have a unique perspective and constituency that together contribute to advancing the green schools movement. Partnerships like these are needed for movements to succeed: breaking down barriers, taking risks, and finding commonalities go a long way to unifying the voice of a movement. “There is so much work to be done that we don’t have time for attitudes of scarcity that keep us from seeing the bigger picture,” says Rachel Gutter, Director of the Center for Green Schools. “With the Green Schools National Network, we are living into the commitment first expressed at the 2014 Green Schools Conference: one voice, one movement. We know that we can accomplish much more for our next generation by working together than we could by working apart.”

GSNN and USGBC recognize that the Green Schools Conference and Expo is the beginning of an opportunity to build something special. The strong relationship USGBC and GSNN have developed continues to influence their collaboration and long-term plans. USGBC admires GSNN’s pursuit of finding its niche and unique value in the green schools movement, and is excited to be a part of the organization’s next steps. Additional projects, such as the “Measuring our Impact” Initiative, are already underway. Whatever the future brings, both organizations are committed to keeping their relationship strong and open to any new opportunities to advance the green schools message.

Interview with Anisa Metzger and Jenny Wiedower, the Center for Green Schools at USGBC