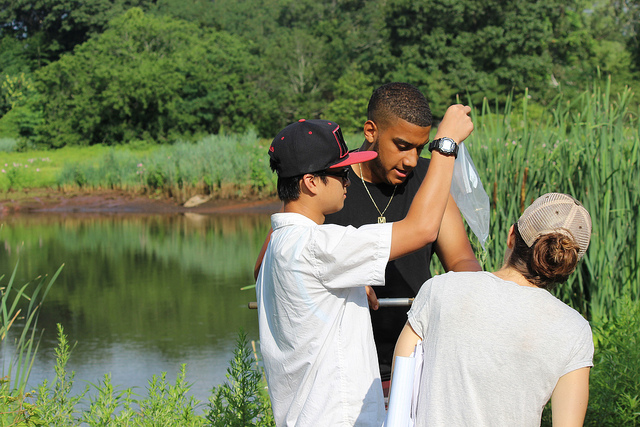 By. Mandy Breuer, Principal at Environmental Charter High School, and Joel Tolman, Director of Impact and Engagement at Common Ground

“That much plastic?” asks Robin, a 12th grader, after sorting through the catch from a 20-minute trawl at the Port of Los Angeles. Environmental Charter High School (ECHS) seniors are spending the day working alongside two community partners, the Los Angeles Maritime Institute and 5 Gyres, to collect water samples in an effort to study local plastic pollution. Their work will ultimately contribute to an upcoming research study and will be used to strengthen a class project centered on the impending plastic ban policy proposal Californians will weigh in on come November.

Across the country in New Haven, Connecticut, something similar is happening. On 20 acres of city park land — the campus of Common Ground High School — students are working with community volunteers and partners to create a new educational wetland and restore a ½ acre of wildlife habitat. Under a highway overpass across town, photos of Common Ground students stand 6 feet tall, looking down on a neighborhood park that they helped to restore. These and other students have just partnered with the U.S. Fish & Wildlife Service and Audubon Connecticut to publish research on the impact of their efforts — demonstrating that urban habitat restoration can genuinely impact biodiversity in cities.

From opposite coasts, Common Ground High School and ECHS have converged on a common approach: engage students in authentic research and action projects by working with community partners and neighborhood residents, and tackling the pressing environmental challenges facing their cities.

In fact, our two schools are far from alone. One recent study identified 184 “multi-cultural eco-high schools” — engaging racially and economically diverse students in learning and leadership around environmental issues and questions. The Nature Conservancy, through its LEAF program, has recognized and connected more than two dozen urban environmental public high schools across the country.

Connecting Schools to Each Other and Their Cities

Despite the growing number of city schools that are challenging their students to investigate and solve real environmental challenges, schools like ours often feel like we are going it alone. Too often, our teachers build curricula from the ground up, rather than learning from one another and from community partners. As a small, stand-alone charter school, Common Ground doesn’t have natural points of connection to other public high schools in our city, state, or region. Even though it is part of a small network of charters, ECHS experiences something similar: who are our peer schools? We are hungry for connections.

Just as importantly, our schools know we can’t tackle our community’s environmental challenges on our own. There is just so much work to do.

Consider the city that ECHS calls home. In 2015, the University of California Los Angeles’ Institute of the Environment and Sustainability rated Los Angeles County a C+ overall in its annual environmental report card. Here are a few notable findings from that report: Los Angeles remains one of the worst U.S. cities in meeting standards for fine-particle pollution. Water samples from storm water, groundwater, and from almost all of the region’s bodies of water show excessive levels of pollutants. Los Angeles imports 58% of its water from more than 200 miles away but logs water use more than twice that of urban regions in Europe and Australia. Los Angeles County still lacks data on how much waste is actually recycled or how much hazardous waste it produces. Significant habitat loss has occurred over recent decades. Much of Los Angeles’ energy comes from coal, and about 20% of Los Angeles County residents are exposed to higher environmental health risks because they live in areas ranked among the worst 10% in California according to state environmental screening results.

New Haven experiences a similarly daunting set of environmental challenges. A recent article in the International Business Times drew parallels between the water crisis in Flint and the siting of toxic facilities in our small city’s predominately low income, racially diverse neighborhoods. The Environmental Protection Agency (EPA) has labeled sections of the three rivers that converge in the city — and flow into the ecologically sensitive Long Island Sound — as impaired for recreation and aquatic life. Rates of asthma hospitalization are the highest of any Connecticut municipality, according to the Connecticut Department of Public Health. 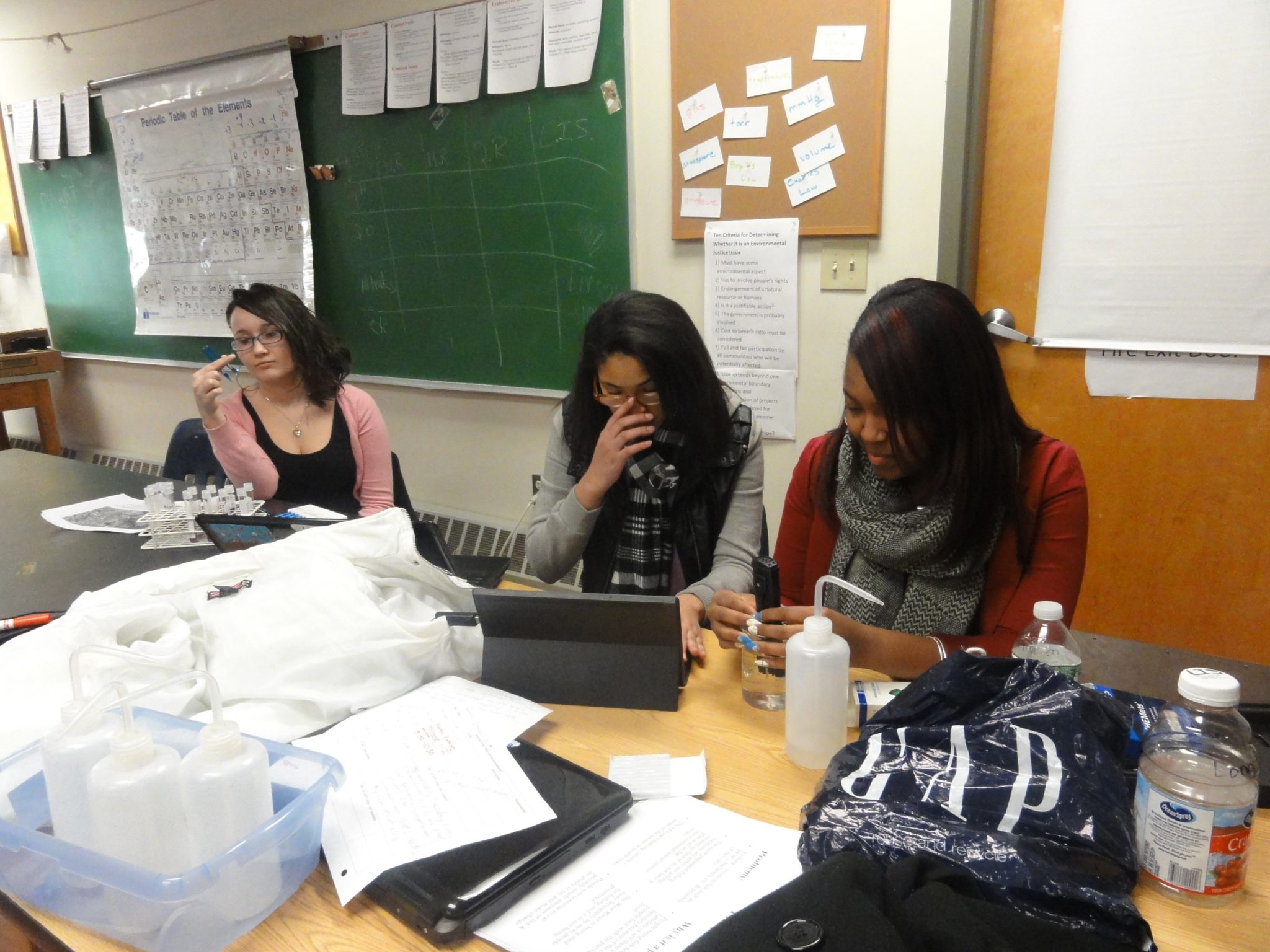 Students in Common Ground’s Environmental Justice Course — Francesca Ruiz, Jasmine Scipio, and Moshema Hull — analyze water samples from New Haven’s three rivers. Their research concluded that the river that passes through the lowest income neighborhoods, and that has the highest rates of fishing, is also the most polluted. Photo | Common Ground

Our schools certainly cannot face these big environmental challenges on their own. But what if we joined with like-minded schools, and with community organizations and neighborhood residents, to catalyze real and sustainable change? That’s what ECHS and Common Ground are trying to do.

In early February 2016, every one of Common Ground’s math teachers stepped back from teaching classes for the day. They gathered with teachers from urban public high schools across our region — including peers in other New Haven schools, colleagues from Hartford and Waterbury, Connecticut, and a carload that came in to join us from New Roots Charter in Ithaca, New York. Together, these teachers mapped out the intersection of typical high school math courses, from pre-algebra to calculus, with the big challenges facing our cities: from storm water management, disproportionalities in the criminal justice system, and income inequality, to urban air quality, urban agriculture, and food justice. The most important part of the day was when teachers sat down with experts in these “City Math” questions — local activists, non-profit leaders, staff from the City Engineer’s office, and data scientists — to build new units and lessons that challenge students to use math to solve urban environmental challenges.

This plunge into City Math is one of a series of Learning Exchanges that Common Ground is hosting in 2016, all focused on Teaching Our Cities: building urban public schools that use their cities as an extension of their classrooms, and that engage their students in tackling questions and challenges related to the urban environment. The first of these Learning Exchanges brought together educators from across the country from schools like Escuela Verde in Milwaukee, the Science and Math Institute in Tacoma, Boston Green Academy, and ECHS. Most are focusing on schools and community partners in their own backyard because they can get together more frequently to build lasting relationships and learn from one another, and because they share the same environmental challenges. That is why the next phase of Teaching Our Cities is focused on bringing together 5 schools for a year and a half of collaborative work — with mini-grants, day-long visits to each school, video documentary work, and capacity-building projects supported by a grant from the EPA.

ECHS has been building itself into a catalyst for local and regional change as well. To really bring about lasting environmental change, ECHS saw the need to deliver relevant and authentic environmental education — to teachers — and equip educators with strategies to be leaders for change. Leveraging the core tenets of the ECHS Green Ambassadors program that schools are hubs for action, and that all of us play an integral role in bringing real sustainable solutions to action, the Green Ambassadors Institute invites K-16 educators, students, community organizations, agencies, and businesses from across Southern California to contribute collectively to a learning lab.

Participants explore the intersections of environmental justice, environmental service learning, interdisciplinary instruction, and strategies for sustainability and walk away with regional partnerships, tools, and curriculum to implement hands-on sustainable education. These professional development sessions include summits that delve into tough, relevant environmental issues that Southern Californians face and hands-on field trips to see the problems and solutions in action.  The sessions showcase where teachers, community organizations, scientists, and students collaborate in crafting environmental service learning projects and curriculum to implement in their classrooms and communities. 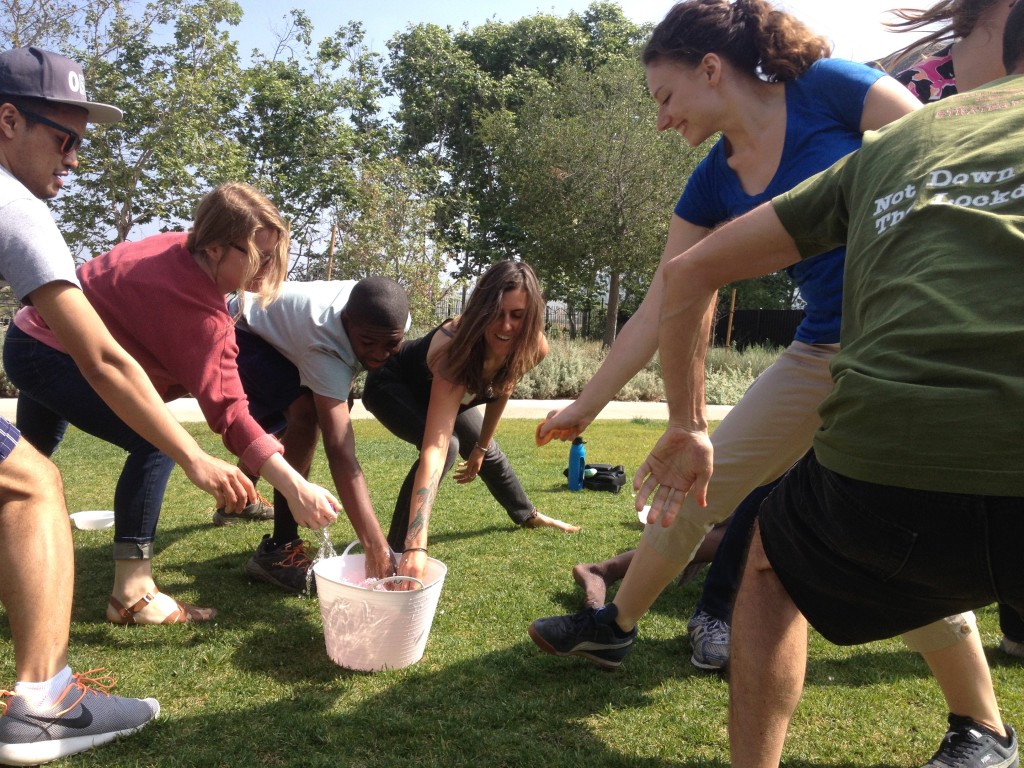 Ready to Help Catalyze Change Within Your Region?

Common Ground and ECHS are focusing close to home, because that’s where our hearts and expertise lie. At the same time, we would love to connect with other schools that are ready to step up as regional catalyst schools within their regions — connecting students, schools, and community partners to learn from each other, work together, and tackle pressing environmental issues.

Are you ready to step up as a regional catalyst school? Or are you hungry, like us, to connect to like-minded educators and schools within your region? We would love to hear from you.

Join us for our workshop on building regional catalyst schools at the Green Schools Conference in Pittsburgh — Thursday, March 31st from 10:15am-11:15am.

About Joel Tolman and Mandy Breuer

Mandy Breuer is Principal at Environmental Charter High School (ECHS), an award-winning public school in Los Angeles. After receiving her B.A. in Public Relations from Texas Tech University and her M.A. in Counseling from Loyola Marymount University, Mandy began her quest to see environmental justice through public education. A counselor by trade, Mandy spends her time designing learning spaces that build the whole student— academically, socially, emotionally, mentally, and physically. Mandy mentors teachers, engages youth leaders in advocacy work, and has built one of the strongest college preparation departments in Los Angeles. Mandy works closely with university partners and environmental and social justice organizations to strengthen school-to-career networks for ECHS students. You can reach Mandy at mandy_breuer@ecsonline.org.