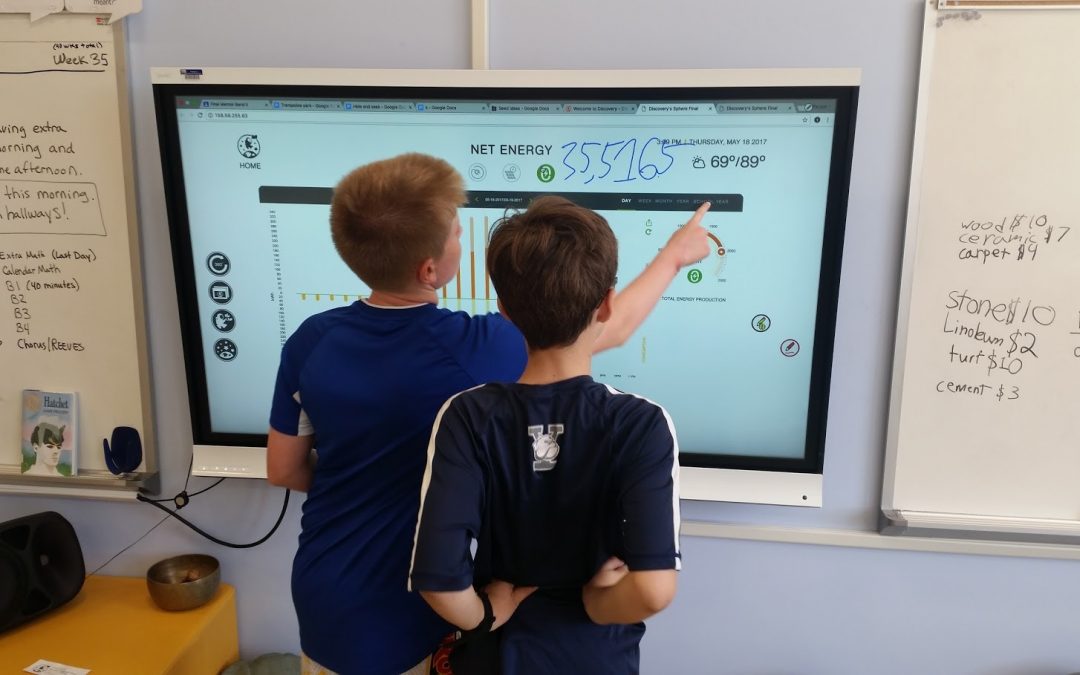 “We learn from our building.” This statement was made at a recent presentation to the Arlington School Board by Kathy Olmsted, a fifth-grade teacher at Discovery Elementary School in Arlington, Virginia, a Green Schools National Network Catalyst School. Discovery, completed in 2015, was awarded Zero Energy (ZE) Certification by the International Living Future Institute (ILFI) in April 2018. It is one of only four schools in the U.S., and the largest building of any type, to have been certified ZE by ILFI. Of the many awards Discovery has received, the most significant was being named a 2017 U.S. Department of Education Green Ribbon School. This is because the award is made as much for the teaching and learning that go on in and around the building as the design and performance of the building itself. Though many aspects of the building support teaching and learning, it is the energy dashboard/Sphere (Discovery Sphere) that prompted Kathy’s statement. Every day students learn authentically from the data the dashboard collects: notably how the building performs in relation to the weather, season, and climate; how students travel to and from school each day; and how much uneaten food is sent to the local food bank each Friday.

Arlington Public Schools (APS) has grown from about 18,500 students in 2007 to almost 27,000 in 2017 and is projected to reach 30,000 students in 2021. Discovery was the first new school built to accommodate this growth. It relieved crowding in a cluster of schools in a relatively high-income, low-diversity section of Arlington County. Quite reasonably, residents of more diverse and mixed income neighborhoods question the equity of Discovery, and want to know what APS is doing to apply what it’s learning from Discovery to new and existing schools in their neighborhoods.

The vision is broad: dashboards at every one of APS’s 33 schools, networked together and providing all sorts of real-time data for authentic learning within schools, between schools, and across the school division. It will take us some time to get there but we are making progress:

Progress toward this vision is not entirely smooth. Rapidly escalating construction costs in the DC metropolitan region are pressuring APS to build more for less. This is forcing the architecture/engineering teams with which it collaborates to find new, less costly ways of constructing the extremely low energy buildings needed to make ZE possible. APS had to work through the Virginia legislature to force its power provider to allow a pilot program, under which the excess energy generated at Discovery may be applied to utility bills at other schools. It may take years for APS to realize its vision for a divisionwide dashboard network. When the division does realize its vision, the energy dashboard will surely have a much better name, collect far more data, and students and teachers will be using it to learn from their buildings in ways we cannot yet conceive.