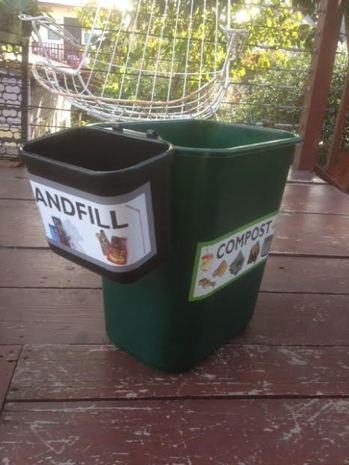 Starting a new school program, such as recycling, comes with many challenges.  How should the recyclables be sorted?  How will students know which bin to place their items?  Who is responsible for emptying the bins and where do the items go?  Now, take that same program and attempt to adapt it across an entire school district.  It may seem impossible to do.  However, the Alameda and Oakland Unified School Districts in California are proving otherwise, using a standardized process that educates students and their families, custodial and food service staff, teachers, and the community.

The Alameda Unified School District’s (AUSD) waste reduction efforts began 2009 with a grant and support from teachers and parents who wanted to see the district’s schools improve their recycling rates (at the time, the district was averaging a 41% recycling rate), as well as adopt a composting program to reduce the amount of waste going to the landfill.  The district started small, recruiting five schools to participate in a pilot food scrap diversion program.  From the beginning, participants (school administrators, teachers, custodians, and waste management company staff) realized that the program was more likely to be successful district-wide if a set of standard procedures was developed to guide implementation.

Fortunately, AUSD did not have to look far.  The district took a cue from local residential recycling protocols and adopted the same bin colors and sorting methods for its own program: blue bins for recycling; green bins for composting; and gray bins for the landfill.  Bins were placed throughout the school: in classrooms, bathrooms (for paper towel composting), and the cafeteria.  Signs and labels were created to help students and staff understand what the bins were for and what items went into them, and custodians received training on the procedures they needed to follow to avoid bin contamination and ensure the bins’ contents were handled accordingly. 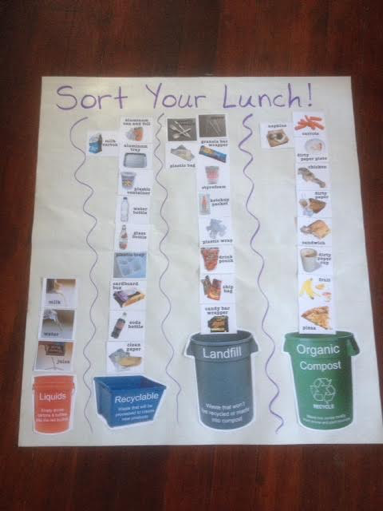 AUSD recognized early on that having student buy-in was crucial for a successful waste reduction program.   Educational initiatives included developing lesson plans and teaching materials around recycling and composting (e.g., kits for Kindergartners that include DVDs and books on recycling as well as a sorting poster and game), and students were recruited to act as cafeteria monitors to ensure food scraps and other waste were placed in the correct bins.  In addition, fifth graders were responsible for emptying their classroom’s recycling bins in either a centralized recycling/composting cart or the appropriate dumpster outside, thus reducing the custodians’ workload.  The students’ participation in waste reduction efforts gave them ownership of the program and fostered opportunities for developing leadership skills.

AUSD’s waste reduction efforts have paid off.  Within six months of starting the pilot, recycling and composting rates at the participating schools had increased from an average of 30% to nearly 64%.  Three years later, the waste reduction program had expanded to all district schools and in 2014 AUSD was diverting 68% of its waste, by volume, from the landfill.  For these efforts, AUSD was awarded a 2014 Golden Bell Award from the California School Boards Association.  Eventually, the district hopes to reach a 90% diversion rate for its recyclable and compostable material.  In the meantime, AUSD schools have been able to reduce the size of their landfill dumpsters and have saved money on waste hauling fees.  The district has even initiated a new pilot program at two elementary schools: introducing mini 1 gallon landfill cans, or “sidecars,” that can hang off another bin.  AUSD believes the sidecars will help students and staff stop and think before placing items in the trash, further reducing the amount of waste going to landfill. 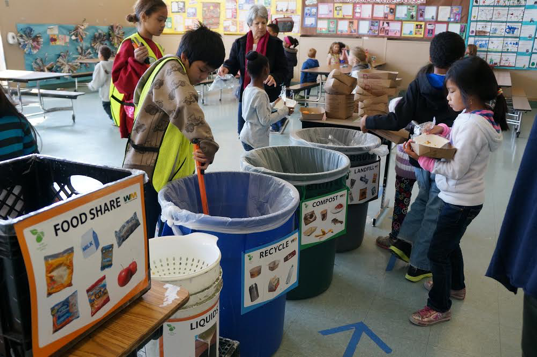 Oakland Unified School District’s (OUSD) Green Gloves Program also grew out of parental concern that the school district could be doing more to promote sustainability.  The district started by providing a mixed recycling program, followed by a food scrap sorting program in 20 school cafeterias. However, each school ran their sorting programs independent of each other and this model limited the district’s ability to scale up to additional schools.  To find a way to share the sorting program more easily across the school district, one of the participating schools convened a roundtable of administrators, partners, and parents to discuss the issue.  Their discussions led to the involvement of Custodial Services by hosting a Green Gloves Symposium to increase custodial buy-in in OUSD’s recycling and composting initiatives. 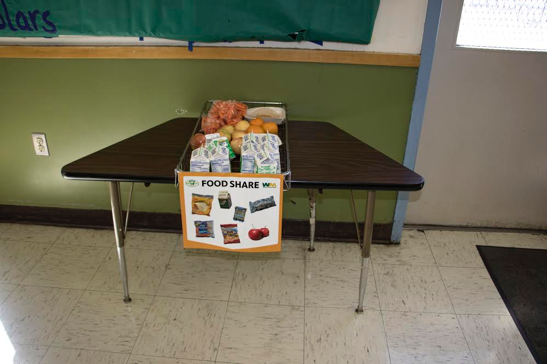 The first Green Gloves Symposium was held in 2009 with the goal of training custodial workers to be experts in the field of waste reduction and sorting.  Attendees learn the benefits of recycling and composting, why it is important, and the procedures they need to follow to be successful.  The Green Gloves Program and Symposium quickly partnered with the district’s Nutrition Services Department, and together they adopted a standardized set of sorting and materials management procedures for custodians and nutrition service staff to follow to ensure uniformity across the school district.  This was important since staff often move around within the district and having continuity in the program would go a long way to ensure its sustainability.

Involving staff has been key to OUSD’s program. Now in its sixth year, the Green Gloves Symposium has custodial champions planning and leading sessions and the staff who attend are more engaged and eager to learn.  Champions from both the Custodial Services and Nutrition Services departments have attended conferences, including the 2014 Green Schools National Conference, to present and learn from the conference’s offerings. Moving forward, these staff champions will assist with Green Gloves Program planning and site assistance, as well as conducting future symposiums.

In addition to the Green Gloves Symposium, OUSD is a leader when it comes to cafeteria waste reduction initiatives.  One of these initiatives is a food share and donation program.  Students can leave whole or unopened packaged food they do not want on a table in the cafeteria during meal time and are free to take items from the table that appeal to them.  At the end of meal time, cafeteria staff sort through the food that is left and keep anything that is shelf stable.  Leftover food, from both the food share table and the kitchen, can then be donated to local nonprofits and families in need.  Currently, OUSD and its waste authority, StopWaste, are in the process of creating a Food Donation Implementation Guide to assist district schools with starting and maintaining food donation programs.

In addition to the food share and donation program, OUSD has implemented several other cafeteria waste reduction activities such as using compostable trays and utensil and napkin dispensers.  A couple of schools are even looking to re-introduce reuseable trays and have installed dishwashers in their kitchens to keep the trays clean.  Future plans include eliminating a significant volume of pre-packaged food and returning to scratch-cooking kitchens.

As in AUSD, student involvement is an important part of the Green Gloves Program.  Student monitors are used in the cafeteria and the classroom to prevent bin contamination, and students work with custodial staff to consolidate bins.  In the classroom, students learn about waste reduction through curriculum and activities lead by the county’s waste management authority including field trips for fourth graders and student action projects for fifth graders.  The education is having a real impact on the students beyond general awareness.  Students are motivated to volunteer their time as sorting station monitors and are sharing their waste reduction knowledge with their families and getting them involved in similar efforts at home.

Currently, OUSD diverts almost 50% of its waste from the landfill and this diversion rate is increasing as more schools in the district adopt the Green Gloves Program.  A number of OUSD’s schools, including Sequoia (93%), Bella Vista (75%), and Hillcrest (71%), have some of the highest diversion rates in the state of California.  Like AUSD, the district’s ultimate goal is to divert 90% of its recyclable and compostable material out of landfills by 2020.

AUSD and OUSD have encountered similar challenges in implementing their waste reduction programs.  One of the biggest challenges has been securing buy-in from custodial staff.  Frequently cited reasons include “it’s not my job”, fear of taking on an unfamiliar task, and that recycling and composting is more work.  To overcome this obstacle, both districts make communicating with the custodial staff a priority and offer opportunities for training and education throughout the school year.  Another challenge has been bin contamination. Student monitors have played a large role in minimizing this issue and all schools post posters and signage by the bins to help students and staff figure out which bin their waste goes in.

Jennifer Abbe is a credentialed teacher and environmental educator. She is the Green Program Facilitator for the Alameda Unified School District, where she supports the Alameda Schools Go Green Program. She has expertise in custodial training, classroom education, and technical assistance to support the diversion program. She is now expanding this project to two other school districts.

Nancy Deming’s passion, focus, and energy are focused on helping K-12 schools find ways to make an environmental difference within the school and in their communities through waste and resource reduction and sorting programs.  She works with Oakland Unified School District as their Sustainability Manager for Custodial and Nutrition Services, a unique shared position that oversees their Green Gloves Program. She also works with two counties in the Bay Area on similar work around waste reduction and sorting programs for K-12 schools and school districts.